At least once a year, Russian travelers are served a bleak reminder of this grim reality. 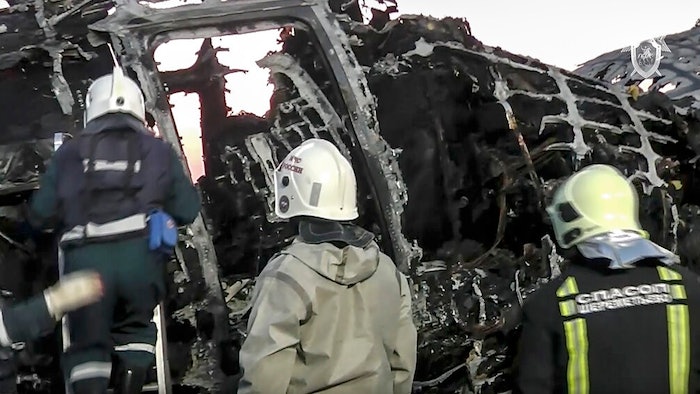 This image taken from a video distributed by Russian Investigative Committee on Monday, May 6, 2019, shows employees of the Russian Emergency Situations work at the wreckage of Sukhoi SSJ100 aircraft of Aeroflot Airlines in Sheremetyevo airport, outside Moscow. A Russian airliner burst into flames while making an emergency landing at Moscow's Sheremetyevo airport Sunday evening, and at least 40 people died, officials said.
The Investigative Committee of the Russian Federation via AP

MOSCOW (AP) — It will be weeks before Russian investigators conclusively identify the cause of Sunday's fiery emergency plane landing in Moscow that killed 41 people, but they already know one thing: Russia has one of the worst aviation safety records in the world.

A 2018 report by the Interstate Aviation Committee, a group that oversees air safety standards in countries that make up the former Soviet Union, found that 42 of the region's 58 aviation accidents that year took place in Russia and led to the deaths of 128 people. Across the former Soviet Union, 75% of those events labeled catastrophes or accidents were attributable to human error.

Another report reviewing data for 2018, released by the International Air Transport Association, placed the former Soviet Union dead last in a regional ranking of aircraft lost to crashes and other disasters. In 2018, it said the former Soviet region rated 1.19 hull losses per million flights. The next closest competitor was the Latin America/Caribbean region with .76 losses, and then the Asia Pacific with .32 losses.

The former Soviet region (CIS) fared slightly better in a review of data from 2013-18, placing just above Africa and just below the Middle East.

But at least once a year, Russian travelers are served a bleak reminder of this grim reality.

"In Russia, there is reliably one big crash with corpses per year," Mikhail Barabanov, an analyst at the Center for the Analysis of Strategies and Technologies, a Moscow think tank, said in a Facebook post. "According to statistics from international organizations, air traffic safety in the Russian Federation and the CIS in 2018 was the worst in the world — worse than Africa."

Sunday's disaster was just the latest example of this, as only 37 of the 78 people aboard survived when an Aeroflot SSJ100 plane heading from Moscow to Murmansk quickly turned back and burst into flames as it made an emergency landing.

Investigators quoted in the Russian press said Tuesday that preliminary results on the possible cause of Sunday's plane fire won't be available until next week, with a full report at least another month away.

But on Tuesday, discussions about pilot error — a common, well-documented theme in Russian aviation disasters — dominated the domestic media. Barabanov said he could not think of more than a single Russian plane crash in the past 20 years that could be attributed to a true equipment malfunction.

Questions about the technical competence of the SSJ100's design arose, while witness accounts of Sunday's disaster have painted a picture of some technical failures compounded by possible human error.

Vladimir Evmenkov, the mayor of Severomorsk, a town on Russia's northern border, says he noticed the pilot took the plane right up through a major thunderhead. He said he witnessed two lightning strikes to the plane's right engine.

"There were two very loud blows and two flashes, but the engine did not catch fire," Evmenkov said. "I do not know if it continued working after that, but it didn't catch on fire, that is for sure."

The pilot reportedly lost communications and some automated flight controls, forcing him to take manual control of the plane, but it was not clear there was a direct and imminent threat to safety.

This is where technical questions about the airworthiness of the SSJ100 come into play. Lightning strikes are common and planes are designed to discharge the energy in electric strikes through their wings or tail section. It is not clear why the Sukhoi-built SSJ100 would have failed to do this.

After circling Moscow's Sheremetyevo Airport twice, the SSJ100 touched down hard, bouncing on its landing gear. On the second bounce, the landing gear gave way and the engines touched concrete, sending the entire back of the plane up in bright flames and heavy black smoke.

Vadim Lukashevich, a former Sukhoi engineer who is one of Russia's most popular aerospace pundits, analyzed the available footage of the crash on his Facebook page. His theory is that the plane simply came down too hard.

"A strong vertical blow actually pushes the entire strut into the bottom panel of the fuel caisson," he wrote in a post. This leads to "an abundant leak of fuel directly onto the engine, and as the landing gear collapses, the engine grinds against the concrete, causing a spark."

Much Russian media speculation has focused on reports that the plane took off from Sheremetyevo with nearly a full tank but did not burn enough fuel before attempting to make an emergency landing, making it too heavy to survive a hard landing.

But Viktor Galenko, an expert on Russia's Interdepartmental Aviation Expert Council, told the state-run RIA Novosti news agency that very few modern commercial airliners have the ability to dump fuel and so are designed to be able to land safely with full tanks.

A person close to the Russian SSJ100 aviation investigation told the RBC news outlet Tuesday that interviews with the pilots revealed several errors that contributed to the severity of Sunday's accident, leading investigators to look closely at Aeroflot's pilot training program.

Those errors included failing to shut off the engines upon landing and opening their cockpit window, which could have exacerbated the fire.

Russian officials and experts have maintained public confidence in the plane and its design. Russia's air transport regulator has rejected calls to ground the aircraft, which previously only crashed once in a 2012 demonstration flight.

The design of the SSJ100 is relatively new — dating back to 2011 — and leans heavily on Western designs and components. Much of the planes' hardware — its avionics and landing gear, as well as the entire cabin interior — is imported for final assembly by Sukhoi, one of Russia's major aerospace firms.

But Russia's commitment to the SSJ100 can also be explained by the significant investment the government has poured into the project, which aims to keep Russia in the global aviation business dominated by Boeing and Airbus.

Sukhoi has only produced 138 of the jets since 2011, but needs an annual production rate of 60 planes a year to break even, according to Pavel Luzin, a Russian aerospace industry analyst.

That means the state-owned Sukhoi is producing the planes at a loss. Aeroflot also loses money operating the planes, according to Luzin.

Russia is already looking beyond the SSJ100 to a new aviation project known as the MC-21, with 460 billion rubles ($7 billion) promised to fund it over the next seven years. The first test flight of the MC-21, hailed Russia's "aircraft of the future," was conducted in 2017.

But no matter how advanced the MC-21 may be, without addressing Russia's known shortcomings in pilot training, there's a very good chance it could also fall victim to Russia's poor air safety record.

$45M Satellite Lost Due to Mix-Up