The controlled detonation was the safest way to deal with explosive material.

SALT LAKE CITY (AP) — A massive fireball soared into the sky in the central Utah desert after officials blew up 11 derailed tanker cars containing propane and biodiesel. The controlled detonation Sunday night was the safest way to deal with the explosive material, Juab County Undersheriff Brent Pulver said Monday about the decision by state and federal agencies, including the U.S. Environmental Protection Agency.

The derailment occurred Saturday when 24 of the 165 cars of a Union Pacific freight train went off the tracks. One car landed on its side and was leaking propane. The conductor and engineer were not hurt in the derailment, whose cause was not immediately known. Nine rail tankers carried propane, and two had biodiesel.

Officials initially planned to move the rail cars but worried that leaking propane could cause an explosion and injure the crew. Pulver posted photos and video online showing the fireball about 75 miles south of Salt Lake City. The nearest town is Eureka, with less than 1,000 residents, about 15 miles away.

The fire burned for several hours. "It was impressive. There is no other way to put it," he said.

Crews were cleaning up the site and planning to bring in heavy equipment to move the rail cars that are damaged beyond repair, Pulver said. There have been no reported effects to people or wildlife, EPA spokeswoman Katherine Jenkins said. The federal agency is checking to see if Union Pacific is liable under Superfund rules to pay back the costs of the cleanup, she said.

Union Pacific spokeswoman Kristen South said the company is clearing the derailment site, repairing the railroad track and working with environmental officials to determine what needs to be done to deal with the impacts of the crash.

The cause of the derailment is under investigation, South said. 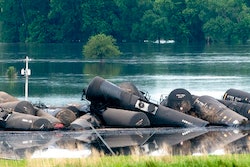 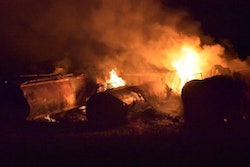 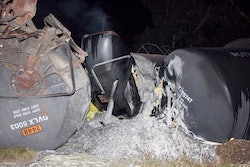