5 Questions Congress Will Have for Boeing, FAA This Week

At the very least, it looks like Boeing and the FAA are going to be under more intense scrutiny for some time. 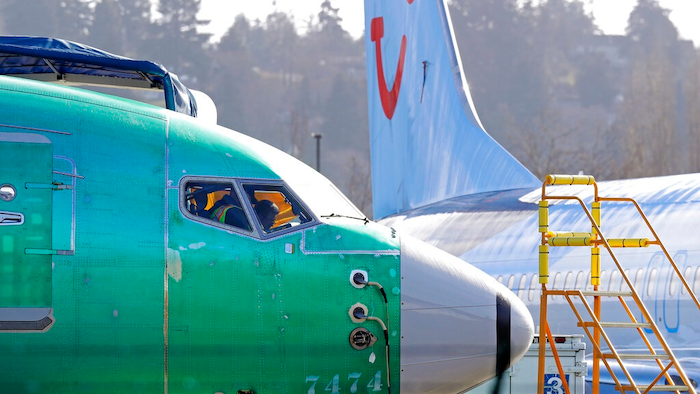 In this March 13, 2019, file photo a worker walks past an engine on a Boeing 737 MAX 8 airplane being built for American Airlines at Boeing Co.'s Renton assembly plant in Renton, Wash. On Wednesday, March 27, the Senate aviation subcommittee will examine how the FAA oversees safety in the commercial aviation industry. Expected to testify is the Transportation Department's inspector general, who is conducting a separate probe of the FAA's decision to approve the Boeing 737 Max aircraft, the type of plane that crashed in October in Indonesia, and this month in Ethiopia.
AP Photo/Ted S. Warren, File

The relationship between Boeing and the Federal Aviation Administration, which has set the global standard in aviation safety for decades, will come under unprecedented scrutiny this week after two deadly airline crashes.

Both accidents involved a Boeing jet green-lighted by the U.S. regulator, which relied heavily on safety assessments made by Boeing employees.

In a startling break from the past, other nations and airlines grounded the Boeing 737 Max en masse after the second fatal crash this month while the same model of plane continued to carry tens of thousands of passengers a day in the United States.

This week, Congress joins the investigation into Boeing and the FAA. On Wednesday, the Senate aviation subcommittee will examine how the FAA oversees safety in the commercial aviation industry.

The acting FAA chief is scheduled to testify. So is the Transportation Department's inspector general, who is conducting a separate probe of the FAA's decision to approve the Boeing 737 Max aircraft, the type of plane that crashed in Indonesia in October, and then in Ethiopia two weeks ago.

The U.S. House plans to hold its own hearings and The Associated Press has reported that the Justice Department is also investigating.

At the very least, it looks like Boeing and the FAA are going to be under more intense scrutiny for some time.

Here are some questions that lawmakers are almost certain to ask:

For decades, the FAA has relied heavily on safety certifications performed by employees of aircraft manufacturers, whose work is overseen by the FAA.

The FAA defends this delegation of work, saying it improves safety by involving more skilled professionals into the review of what companies do. Agency officials stress that the last fatal crash of a U.S. airliner took place a decade ago.

Sen. Richard Blumenthal, D-Conn., called the FAA arrangement with manufacturers "safety on the cheap," and said he wants to know more about the role that Boeing employees played in the FAA's decision to certify the Max.

SHOULD FAA'S BUDGET BE INCREASED?

The agency concedes that it doesn't have resources to keep pace with growth in the aviation industry. Outside experts say the FAA is overmatched — it can't pay enough to attract and keep people with the technical expertise to regulate such a complex industry.

"It's a money thing, and they don't have the money to do all the kinds of oversight," said Todd Curtis, a former Boeing Co. safety engineer and creator of airsafe.com, a website that focuses on airline safety.

WHAT DID THE FAA KNOW ABOUT THE FLIGHT SYSTEM?

With the Max, Boeing created an automated flight-control system that has never been used before; it can direct the nose of the plane down if sensor readings indicate the plane may be about to stall, or lose aerodynamic lift from the wings. The interaction between pilots and that automated system is now at the center of the investigation into both crashes.

According to published reports, high-ranking FAA officials were unaware of a Boeing's stall-protection system called the Maneuvering Characteristics Augmentation System, or MCAS. Lawmakers are likely to ask who within FAA knew about the software and whether they failed to grasp its significance.

WHY DID THE FAA ACT IN GROUNDING THE PLANE?

Flight safety regulators worldwide have followed the lead of the FAA for decades, but not this time. China, whose airlines have more Max jets than any other country, grounded the plane one day after the crash in Ethiopia. Others including the European Union and Canada followed quickly, citing a need for caution. That left the U.S. standing alone in allowing passengers to keep flying on the Max.

President Donald Trump announced the grounding of the Boeing plane on the afternoon of March 13, three days after the crash in Ethiopia. The FAA said the planes were being parked because of "newly refined satellite data" and evidence collected at the crash site. Satellite information showed the planes that crashed had similar flight paths — erratic rates of alternately climbing and descending almost immediately after takeoff.

Acting FAA Administrator Daniel Elwell said the agency grounded the plane as soon as it had data to support the decision.

Lawmakers will want to know whether the FAA's delay exposed tens of thousands of passengers to unnecessary risk.

After a 2009 crash that killed 50 people near Buffalo, New York, Congress raised the minimum experience for starting airline pilots from 250 flight hours, to 1,500 hours in many cases, and 1,000 hours for graduates of an accredited aviation school.

U.S. airlines once got most of their pilots from the military. Brent Bowen, a professor at Embry-Riddle Aeronautical University, said most now get a college degree and flight training from an aviation school, then work another couple years as a flight instructor before joining an airline.

Other countries follow training standards updated in 2006 by the United Nations' aviation organization, which require far less flying time and emphasize simulator training and being part of a flight crew.

"Most of the world's airlines are using training academies where they can hire people off the street without any higher education, give them 250 hours of flight training in small aircraft, and in as little as 12 to 14 months they put them in the (co-pilot's) seat of a full-size airliner," Bowen said.