A Senate subcommittee is contending the agency was too deferential to Boeing in approving the 737 Max airliner. 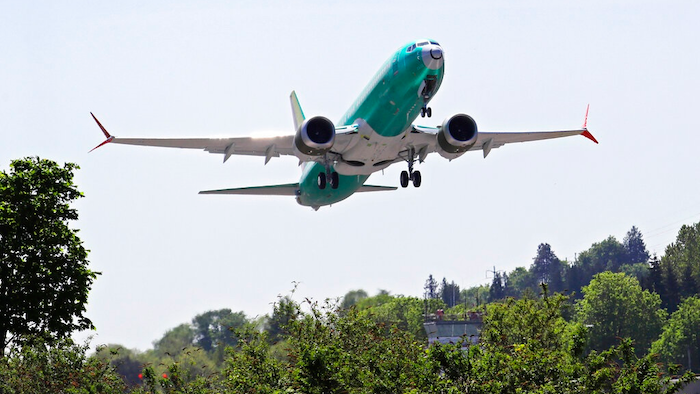 In this May 8, 2019, file photo a Boeing 737 MAX 8 jetliner being built for Turkish Airlines takes off on a test flight in Renton, Wash. On Wednesday, July 31, members of a Senate subcommittee clashed with Federal Aviation Administration officials, contending the agency was too deferential to Boeing in approving the 737 Max airliner.
AP Photo/Ted S. Warren, File

Members of a Senate subcommittee clashed with Federal Aviation Administration officials Wednesday, contending the agency was too deferential to Boeing in approving the 737 Max airliner.

Senators cited newspaper reports of lax oversight as the jet and flight control software called MCAS were developed. The software, which points the plane's nose down to avoid an aerodynamic stall, has been implicated in two deadly crashes.

Sen. Jack Reed, a Rhode Island Democrat, asked the officials about a report in The Wall Street Journal that the FAA let Boeing do an interim fix after an Indonesian Lion Air Max crashed in October, even though an analysis showed a risk of a similar cockpit emergency happening again. The agency instead notified pilots about how to turn off MCAS and waited for a safer, more permanent fix of the software from Boeing.

The Lion Air crash was followed in March by the crash of an Ethiopian Airlines Max, with a total of 346 people dying in both. Eventually the planes were grounded worldwide, with the FAA among the last agencies to do so.

FAA Associate Administrator for Aviation Safety Ali Bahrami replied that the scenario is true, saying the interim fix after the Lion Air crash was reviewed by FAA engineers and in line with normal practices. In the Indonesia crash, actions of the pilots played a significant role, Bahrami said, making it most urgent to tell pilots about the proper procedures to disable MCAS.

But Reed said there was no mention of improvements needed in MCAS, leaving an implication that there were no long-term issues with the software.

"That lack of transparency, I think, is not appropriate," he said.

Bahrami told the Transportation subcommittee of the Senate Appropriations Committee that it has a delicate balance between disclosing information that crash investigators want to keep private and taking safety actions.

"From a safety perspective we felt strongly that what we did was adequate" based on discussions with airlines and data collected at the time, he said.

However, Bahrami said knowing what the agency knows now, the FAA may have to revisit that decision.

Reed said he wants the FAA to stand up and say this aircraft is completely safe to fly, but that "doesn't appear to be the case in this situation."

Subcommittee Chairwoman Sen. Susan Collins, R-Maine, raised questions about the FAA's program of designating company employees to do inspections of aircraft as they are being developed and built. She cited a report in The New York Times that said FAA managers appeared to be more concerned about Boeing meeting production timelines than for the safety of the Max.

But Bahrami said that isn't correct, saying that there was extensive dialogue over Boeing's compliance with regulations. He conceded, though, that one or two FAA officials weren't happy with the decision to let production continue, and said the decision was elevated to him to make the decision. "In my view, the process was followed," he said, adding that he looks forward to outside reviews to see if there's anything that could have been done differently.

Sen. Joe Manchin, D-W.Va., who is a pilot, said he couldn't believe the FAA allowed Boeing to give pilots only an hour of training on an iPad to fly the Max, even though the aircraft had new engines and a software system that wasn't mentioned early on in the pilots' manual. "We did a complete makeover basically using the same air frame but we changed the whole dynamics of that plane to perform differently," he said.

The biggest selling point for the Max was it required minimal training for pilots who already were trained to fly older generation 737s, he said.

But Bahrami said an FAA flight standardization board, which included pilots, compared the Max to older 737s and determined that the computer-based training was sufficient, rather than requiring training on simulators.

Bahrami, who once was a corporate "designee" doing inspections for the FAA, said a strong spotlight on the agency will make it stronger, even though during the past 10 years U.S. airlines have carried 7 billion passengers with only one fatality. "We welcome external review of our system and processes and remain committed to making commercial and general aviation safer," he said.

Manchin still wasn't satisfied, saying the U.S. has relied on the aircraft industry "more than we should rely on the industry to do the job that we should do to make sure the American public is safe," he said. For the Max to return to the air, he said every Boeing official should fly on the plane for a month to ensure its safety. "I'm not getting on the 737 Max until I see the president of Boeing and all his and her associates be on that plane first and fly for a substantial time," he said.

5 Questions Congress Has for Boeing, FAA