Dozens of homes were destroyed, a teenager was killed and many were injured in communities north of Boston last week. 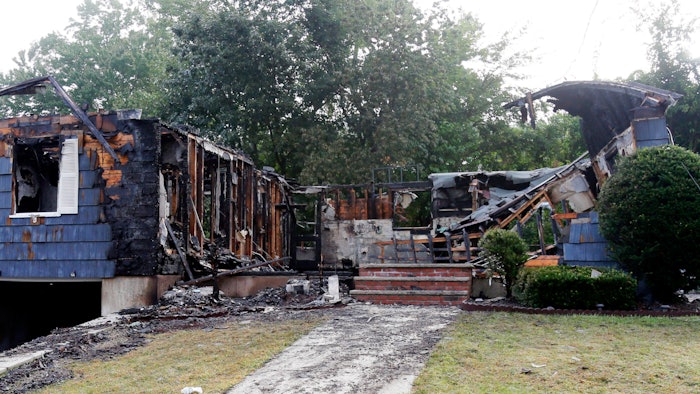 The house owned by Lawrence Police Officer Ivan Soto sits nearly burned to the ground on. It was one of multiple houses that went up in flames on Thursday afternoon after gas explosions and fires triggered by a problem with a gas line that feeds homes in several communities north of Boston. After rushing home to check on his family and warn his neighbors to evacuate, Soto went back on patrol while his house was burning down.
AP Photo/Mary Schwalm

LAWRENCE, Mass. (AP) — The investigation into the Boston-area natural gas explosions is partially focused on pressure sensors that were connected to a gas line that was being taken out of service shortly before the blasts, the head of the National Transportation Safety Board said Sunday.  NTSB Chairman Robert Sumwalt said the sensors can signal for gas pressure to be increased if the pressure gets too low. He said investigators will try to determine whether those sensors played any role in Thursday's explosions and fires.

Dozens of homes were destroyed or damaged, a teenager was killed and dozens of people were injured in Lawrence, North Andover and Andover. Thousands were forced to leave their homes. Also Sunday, residents in the three communities north of Boston were allowed to return to their homes after crews finished shutting off nearly 8,600 gas meters. Electricity was restored to all the affected homes and businesses, but gas service may not be restored for weeks.

"It's evident to me and to all of us the Merrimack Valley and the residents of our state are being as supportive as they can be and as kind as they can be to one another during this most difficult time," Gov. Charlie Baker said at a news conference Sunday. "We still have a very long way to go but we're very happy that people can return to their homes this morning."

Schools in Lawrence will be closed Monday because of the natural gas situation, officials said.

Sumwalt said the investigation is focused on high pressure in pipelines. On Saturday, he said officials will be looking at how local Columbia Gas officials responded to a "pressure increase" in the Lawrence area that was detected at the company's pipeline control center in Columbus, Ohio, prior to the explosions and fires. He said there was no evidence the explosions were intentional.

Columbia Gas on Sunday turned away hundreds of Lawrence residents who wanted to make damage claims because it couldn't handle the deluge, The Boston Globe reported. The company told residents, many of whom waited for several hours, to come back Monday. "I am tired. I am frustrated," Renata Rena, who waiting in line with her 3-year-old daughter, told the newspaper.

Joe Hamrock, chief executive of Columbia Gas' parent company, NiSource, said Sunday that the company was taking full responsibility for what happened and is implementing a service restoration plan. He said the devastation and tragedy caused by the explosions are heartbreaking.

"We're in this for the long run," Hamrock said. "We know this has damaged the confidence and trust in our company and what we do. Our full commitment is restoring that trust and that confidence."

Officials said gas company technicians will turn all the meters back after safety inspections of the entire system are complete — a process expected to take several weeks. They warned residents not to turn the meters back on themselves, not to turn on gas appliances until service is restored and to call 911 and leave their homes if they smell gas.

Harvest Water from the Air