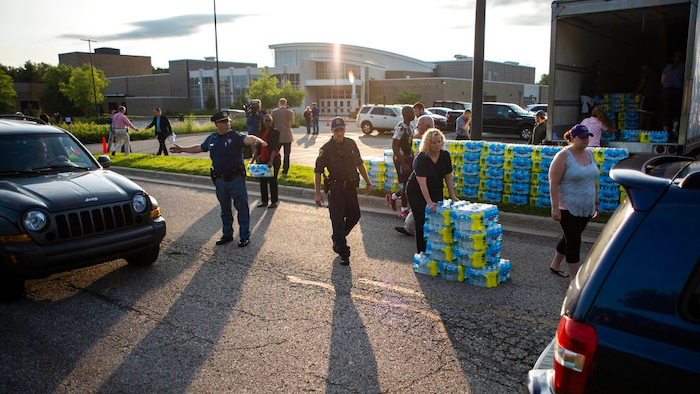 Emergency response teams hand out free bottled water to residents at the Parchment High School in Parchment, Mich., Friday, July 27, 2018. Authorities handed out thousands of free bottles of water Friday for two southwestern Michigan communities where the discovery of contamination from toxic industrial chemicals prompted a warning against using the public water system for drinking or cooking.
Daniel Vasta/Kalamazoo Gazette via AP

PARCHMENT, Mich. (AP) — Authorities handed out thousands of free bottles of water Friday for two southwestern Michigan communities where the discovery of contamination from toxic industrial chemicals prompted a warning against using the public water system for drinking or cooking.

Michigan and Kalamazoo County health officials announced a day earlier that tests found perfluoroalkyl and polyfluoroalkyl substances, known as PFAS, in the water supplied to the city of Parchment and neighboring Cooper Township, about 125 miles (200 kilometers) west of Detroit. About 3,000 people are on the affected water system.

"As soon as the tests results were reported, the state and local agencies tasked with protecting public health and our environment began coordinating a response," Gov. Rick Snyder said in a statement.

PFAS have been detected in water systems in some 30 states. They are used in manufacturing, firefighting and thousands of household and consumer products. Many communities have reported high PFAS levels in water systems near military bases and factories that worked with the compounds. The U.S. Environmental Protection Agency is hosting public meetings in communities where the chemicals have contaminated water systems.

The source of the Michigan contamination is under investigation. The Parchment area has a history of paper manufacturing.

"It's not the type of thing you want to wake up to, to find out you've been drinking poison," area resident Steve VanDiver told MLive.com.

Officials announced a plan Friday to drain Parchment's water system, hook it up to the water supply in nearby Kalamazoo, then flush out Parchment's system until tests show the PFAS at acceptable levels. After that, officials will determine when affected residents can use the main water supply again.

Meanwhile, more than 3,000 cases of bottled water were handed out by 11 a.m. Friday at the city's high school.

"We've had lines of cars. We've had people show up and want to volunteer to just hand out water," Kalamazoo County Sheriff Richard Fuller told reporters. "We have water. We have a lot of water right now. We will take care of people."

Fuller said Michigan's Department of Environmental Quality "is working on a plan to test private wells" in the area.

A June report by the Department of Health and Human Services' toxicology office said the PFAS family of chemicals is more toxic than previously believed, threatening human health at concentrations seven to 10 times lower than once realized. As a draft of the report circulated among Trump administration officials earlier this year, a White House email released under a public records request described the findings as a "potential public relations nightmare."

In Michigan, the Legislature enacted $23 million in emergency spending to address PFAS contamination as efforts continued to help the city of Flint recover from its crisis with lead-tainted water.

The tests for PFAS were part of an effort announced in May to check for contamination in Michigan's 1,380 public water systems.