Seven people have been hospitalized even though the company recalled these products almost a month ago. 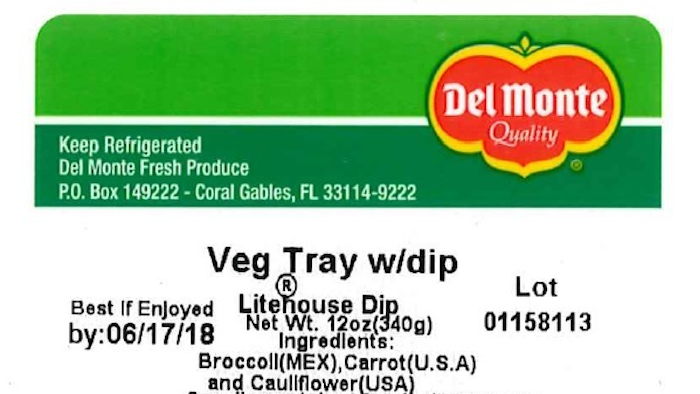 Health officials from the FDA and Centers for Disease Control and Prevention have reported 212 cases of people from four states being infected with a parasite called Cyclospora cayetanensis after eating pre-packaged Del Monte Fresh Produce vegetable trays containing broccoli, cauliflower, carrots and dill dip. So far seven people have been hospitalized even though the the company recalled these products almost a month ago - on June 15.

Cyclospora can cause an intestinal illness called cyclosporiasis when it contaminates food or water and is then ingested. Symptoms include frequent diarrhea, loss of appetite, weight loss, stomach pain or cramps, bloating, increased gas, nausea and fatigue. If not treated, these symptoms may last up to a month or longer.

The 212 cases have been linked to recalled Del Monte 6 oz. and 12 oz. vegetable trays in Iowa, Indiana, Minnesota and Michigan. The company is also recalling these veggie trays in the state of Wisconsin, as well as 28 oz. veggie trays which include broccoli, cauliflower, carrots, celery and dill dip, which were distributed to Illinois and Indiana.