The exercise was meant to highlight lax nuclear security in France. 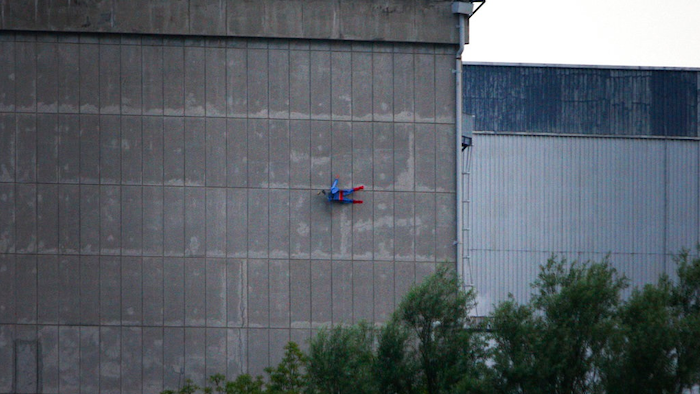 In this photo released by Greenpeace, a drone resembling the character Superman crashes into a wall of the nuclear power plant of Le Bugey, central, France, Tuesday, July 3, 2018. The environmental activist group says the drone was harmless but the action showed the lack of security in nuclear installations in France, which is heavily dependent on atomic power.
Nicolas Chauveau/Greenpeace via AP

PARIS (AP) — Greenpeace activists say they have crashed two remote-controlled aircraft — a drone and a tiny radio-controlled plane — into a French nuclear plant to highlight the lack of security around the facility.

The drone, which was decorated like a miniature Superman, slammed into the tower in Bugey, 30 kilometers (20 miles) from the eastern city of Lyon, according to a Greenpeace video Tuesday.

A short time later, the group released a video showing a small remote-controlled plane heading to a crash at the same wall.

The environmental group says the aircraft were harmless but showed the lax nuclear security in France, which uses atomic power for about 75 percent of its energy needs.

Last week 19 Greenpeace activists were handed suspended sentences for breaking into another nuclear plant in November 2017.