The country is backing down on promises to sharply reduce nuclear power production. 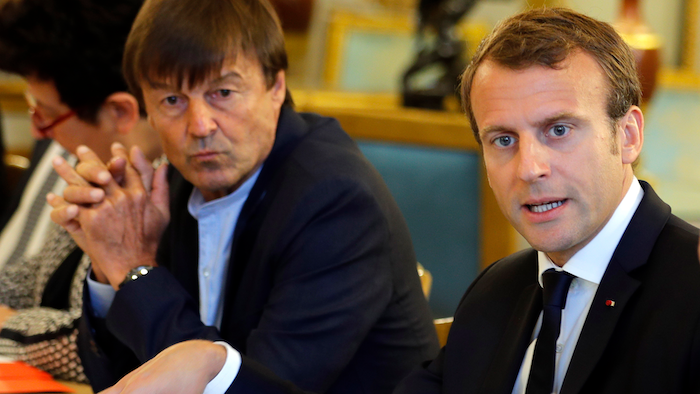 In this Sept.5 2017 file photo, French President Emmanuel Macron, right, and Environment Minister Nicolas Hulot meet with NGOs to discuss climate and environment at the Elysee Palace in Paris. Macron is planning a climate summit next month to push his "Make our Planet Great Again" agenda, and to unveil the winners of his fellowship competition for U.S. climate scientists frustrated by the Trump administration's attitude toward global warming.
Philippe Wojazer , Pool via AP, File

PARIS (AP) — France's environment minister is backing down on promises to sharply reduce nuclear power production so that the government can concentrate on reducing fossil fuels instead.

Nicolas Hulot told reporters Tuesday that it's too "brutal and unrealistic" to meet earlier pledges to cap the amount of France's electricity produced by nuclear plants at 50 percent by 2025.

But Hulot made clear his priority is weaning France's economy from fuel that contributes to global warming. His ambitious goals include banning all sales of gasoline and diesel cars by 2040.

France depends more on nuclear energy than any other country, getting about three-quarters of its electricity from its 58 nuclear plants.