Exposure at high levels is linked to liver damage, developmental problems and some forms of cancer, among other risks. 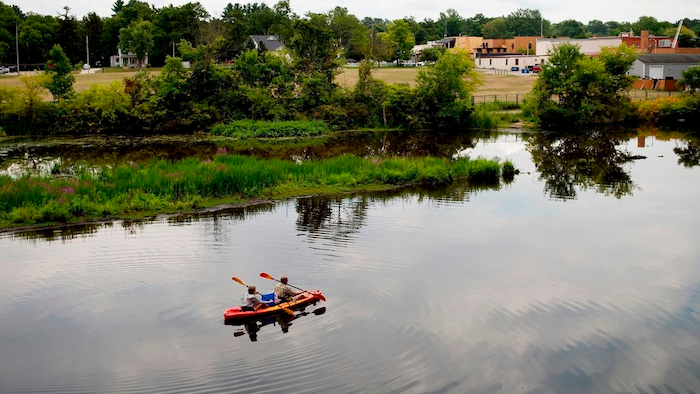 In this Aug. 14, 2017 file photo, a couple kayak on the Rogue River adjacent to where Wolverine World Wide's tannery once stood, in Rockford, Mich. The Michigan Department of Environmental Quality is investigating the connection between old waste drums in the area and an old Wolverine World Wide tannery waste dump nearby. Some private wells in the area have tested positive for elevated levels of per- and polyfluoroalkyl substances called PFAS, also called perfluorinated chemicals, or PFCs. A government report shows that a family of industrial chemicals turning up in public water supplies around the country threatens human health at concentrations seven to 10 times lower than previously realized. The chemicals are called perfluoroalkyl and polyfluoroalkyl.
Neil Blake /The Grand Rapids Press via AP

WASHINGTON (AP) — A family of industrial chemicals turning up in public water supplies around the country is even more toxic than previously thought, threatening human health at concentrations seven to 10 times lower than once realized, according to a government report released Wednesday.

The chemicals are called perfluoroalkyl and polyfluoroalkyl. They were used in such goods as fire-suppressing foam, nonstick pans, fast-food wrappers, and stain-resistant fabric and carpet, but are no longer used in U.S. manufacturing. Water sampling has found contamination in water around military bases, factories and other sites.

Exposure at high levels is linked to liver damage, developmental problems and some forms of cancer, among other risks.

A draft of the report, by the Department of Health and Human Services' toxicology office, had set off alarms within the Trump administration earlier this year. A January email from a White House official, released under the Freedom of Information Act, referred to the findings as a "potential public relations nightmare."

The draft went under months of government review before Wednesday's publication, but the key finding — that the chemicals are dangerous at specific levels much lower than previously stated — was not changed.

The EPA, which scheduled a series of hearings on the chemicals, said last month that it would move toward formally declaring the two most common forms of PFAS as hazardous substances and make recommendations for groundwater cleanup, among other steps.

U.S. manufacturers agreed in 2006 to an EPA-crafted deal to stop using one of the most common forms of the chemical in consumer products.

The findings will likely lead state and local water systems with the contaminant to boost filtering.

"The more we test, the more we find," Olga Naidenko, a science adviser to the Environmental Working Group nonprofit, said Wednesday.