"We express sincere apologies ... for the great deal of inconvenience related to our air bags," he said. 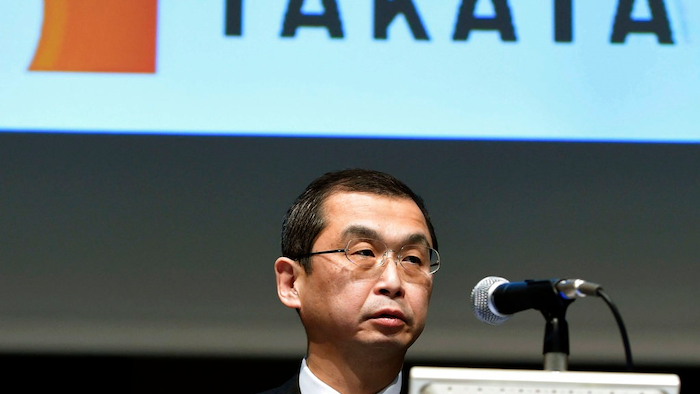 TOKYO (AP) — Takata Corp., the Japanese air bag maker embroiled in a massive global recall linked to at least 22 deaths, said Thursday that its president has resigned now that its acquisition by U.S. mobility safety company Key Safety Systems has been completed.

Takata's president, Shigehisa Takada, said in a statement that as of Wednesday he was succeeded by Yoichiro Nomura, its chief financial officer.

Takata went into rehabilitation proceedings last year, slammed by the massive costs and sales damage from defective Takata air bag inflators, which can explode with too much force and spew shrapnel at a vehicle's drivers and passengers.

At least 22 deaths and more than 180 injuries have been linked to the defect. Some 50 million Takata air bag inflators have been recalled in the United States and millions more globally. But many repairs still remain undone.

Takada said he was stepping down because the transfer to Key Safety Systems, based in Auburn Hills, Michigan, was complete.

"We again express sincere apologies to our customers, creditors, shareholders and many others for the great deal of inconvenience related to our air bags," he said.

It paid $1.6 billion (175 billion yen) in a deal under which Key gets all Takata assets aside from those making replacement air bag inflators. Takata will continue to run those operations until they close.

Takada is the grandson of the company's founder. The defect scandal set off calls for him to step down.

"We are excited about the opportunities created through this combination," Joyson Safety Systems Executive Chairman Jeff Wang said of bringing together Takata and Key Safety Systems.

"And we are committed to providing safety solutions of the highest quality and reliability to drive the next generations of mobility."

The acquisition of Takata won antitrust clearance and bankruptcy court approvals in various countries, he said.

The company said it plans to be a global leader in auto safety as well as other mobility systems, including steering-wheel technology, air bags and seatbelts.

Various lawsuits are pending in U.S. courts against Takata, including several class action lawsuits that allege automakers knew about the dangers of the defective air bags ahead of the recalls.

Takata uses the chemical ammonium nitrate to create small explosions to inflate air bags. But the chemical can deteriorate when exposed to high temperatures and airborne moisture. That causes it to explode with too much force, blowing apart a metal canister and hurling shrapnel.

Earlier this year, Takata reached a $650 million deal in the U.S. to settle consumer protection claims from 44 states and Washington, D.C.