Today's recalls bring the total number of vehicles recalled in this round to 16.4 million. 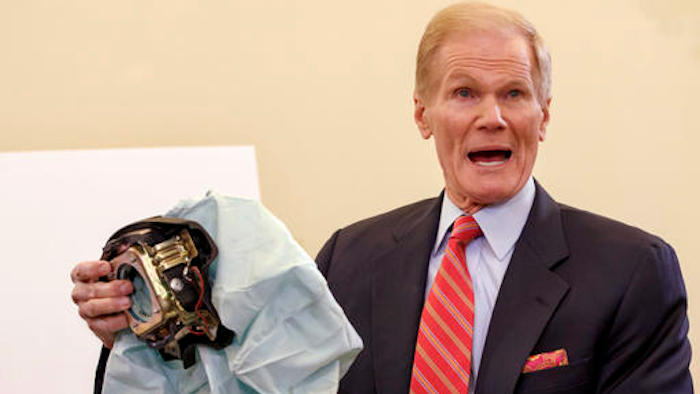 In this Nov. 20, 2014, file photo, Senate Commerce Committee member Sen. Bill Nelson, D-Fla., holds an example of a defective air bag made by Takata of Japan that has been linked to multiple deaths and injuries in cars driven in the U.S., during a hearing on Capitol Hill in Washington.
AP Photo/J. Scott Applewhite, File

Thursday's recalls are part of a massive expansion announced in May. Seventeen automakers are adding 35 million-to-40 million inflators to what already was the largest auto recall in U.S. history.

Of the recalls announced Thursday, General Motors had the largest total at 1.9 million, covering pickup trucks and large SUVs. The company said in a statement that would start the recall process in cooperation with the government, even though it doesn't believe the trucks pose an unreasonable safety risk.

The latest round of recalls covers passenger air bags mainly in older models in states with high temperatures or humidity. Takata inflators can malfunction and spew shrapnel into drivers and passengers when exposed to humidity and repeated hot-and-cold cycles.

Thursday's recalls bring the total number of vehicles recalled in this round to 16.4 million. The recalls are being phased in during the next three years.

Takata uses ammonium nitrate to create a small explosion that inflates air bags in a crash. But the chemical can deteriorate over time when exposed to high heat and humidity and can blow apart a metal canister, spewing hot shrapnel into vehicles. The inflators are responsible for at least 11 deaths and more than 100 injuries worldwide

Takata agreed May 4 to the recall expansion, and more recalls will be announced later. The recalls are being phased in due to a lack of available replacement parts. Models from 2011 or older in high heat and humidity areas will get first priority, followed by 2008 and older models in Southern-tier states, then 2004 and older models in the rest of the country. Research has shown that it takes at least six years for the ammonium nitrate to deteriorate.

On Wednesday, a U.S. Senate report found that Fiat Chrysler, Mitsubishi, Toyota and Volkswagen are selling new vehicles with Takata air bag inflators even though the devices are likely to be recalled within a few years. The inflators haven't been recalled yet, so it's legal for the cars to be sold.

GM is questioning the latest recalls, saying that no inflators in its trucks have ruptured during an estimated 44,000 crashes, or in testing of returned inflators. It also says the inflators were uniquely made for GM trucks and SUVs with greater venting and machined steel end caps.

"We don't have any evidence at this point that these inflators aren't working as designed," spokesman Tom Wilkinson said.

But NHTSA spokesman Bryan Thomas said GM has filed paperwork declaring the inflators defective and they will be recalled. "The science clearly shows that these inflators become unsafe over time," he said.

Before the latest expansion, automakers had recalled 28.8 million Takata inflators, so as many as 69 million could be recalled in the U.S. alone.

Since the recalled models vary by state and age, officials say that the best way to see if your car is affected is to go to https://vinrcl.safercar.gov/vin/ and key in the vehicle identification number. That number is on the driver's side of the dashboard near the windshield or on state vehicle registrations. It may take several weeks for all the newly recalled vehicles to be entered into the database.