A worker dragging his foot along the floor of a Texas plant may have sparked an explosion. 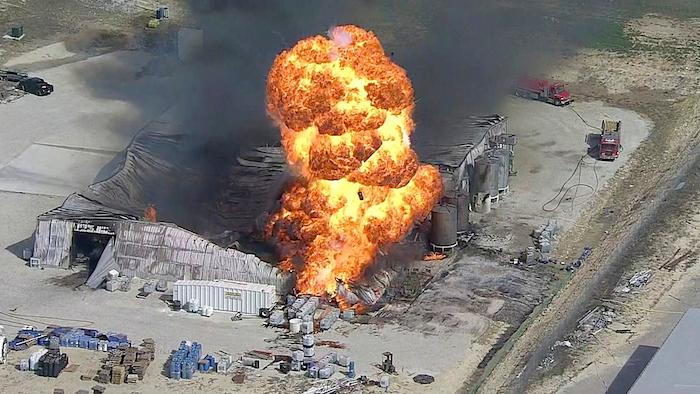 In this image from video by KDFW, a fire burns at the Tri-Chem Industries plan in Cresson, Texas. Officials said fears of another blast amid the toxic chemicals prevented crews from battling the blaze.
KDFW via AP

CRESSON, Texas (AP) — Investigators believe a worker dragging his foot along a factory floor sparked a Thursday explosion at a Texas chemical plant that injured two workers and left a third unaccounted for, and fears of another blast amid the toxic chemicals prevented crews from battling the ensuing blaze, an official said.

Nine emergency-rescue and fire departments responded to the blaze at the Tri-Chem Industries plant in Cresson, about 50 miles (80 kilometers) southwest of Dallas, but were evacuated from the vicinity because of risk of exposure and of another explosion, Cresson Mayor Bob Cornett told The Associated Press.

The worker who dragged his foot while chemicals were being mixed caught fire from the waist up and was airlifted with critical burn injures to a Dallas hospital. Another worker with less severe injuries also was treated at a hospital. Cornett identified the missing worker as 27-year-old Dillon Mitchell.

The state's on-site emergency spokesman, Staff Sgt. Earl Gillum of the Texas Department of Public Safety, said the search has gone from a rescue effort to a recovery effort. If Mitchell is still in the wreckage, he is believed to be dead, he said.

Aerial photos showed the plant's metal beams had caved in. After the flames calmed, crews entered the wreckage for another search for Mitchell but found nothing and ended for the night, Cornett said late Thursday. They will resume Friday.

Cornett said Tri-Chem Industries mixes chemicals that are primarily used by the oil and gas industry to drill disposal wells, and that although he didn't know how many of the chemicals at the plant were hazardous, "what was burnt and exploded was quite toxic."

Cornett said that the wind was carrying black smoke and fumes emanating from the plant away from residents, but that the city could issue an evacuation order if the wind direction changed.

A spokesman for the Texas Commission on Environmental Quality, the state agency responsible for coordinating the cleanup, declined to produce a list of the plant's on-site chemicals, telling an AP reporter to file a public information request.

In recent years, Texas leaders have made it increasingly difficult for the public to find out about the chemicals manufactured and stored at such plants.

After a fertilizer plant explosion in the city of West, Texas, killed 15 people in 2013, Greg Abbott, who was then attorney general and is now governor, ruled that state agencies could withhold information about hazardous chemicals because of "ongoing terroristic activity."