Underground Fire at Glass Plant May Be Spreading

The fire was seen shooting up through the ground. 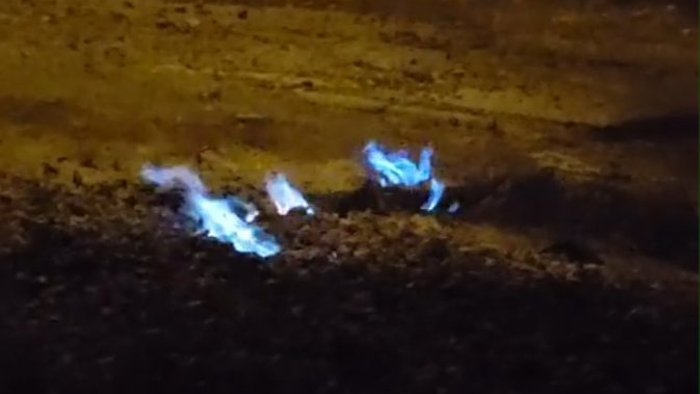 CREIGHTON, Pa. (AP) - Officials fear that an underground coal refuse fire at the site of a soon-to-be-shuttered glass factory in western Pennsylvania may be spreading.

PGW, the current owner, "discovered visual embers and flame in a small crack in the soil about 30 or 40 yards away from its auto glass production building. The crack was approximately 5 to 6 feet in length and 2 to 3 inches wide," the company said in a statement.

Since last September, the company has been investigating an ongoing fire under the plant caused by coal refuse apparently used as backfill at the site many years ago.

Officials say workers suppressed the flames and are clearing vegetation from the area. Indoor air quality will be monitored inside the plant, where the company has had to address localized hot spots on the interior concrete floor since last year.

Operations at the 135-year-old automotive glass manufacturing site formerly owned by PPG are to end after this week as production is moved to other sites. PGW has said that the Creighton plant is outdated and its manufacturing capacity is above market demand. About 160 remaining employees are to be laid off.

The fire has been investigated by the state Department of Environmental Protection and the federal Occupational Safety and Health Administration, but details on a plan to extinguish the fire haven't been made public.

Tony Taliani, chairman of the township commissioners, said he is disturbed that the fire discovered about 10 months ago is still burning, and said the company hasn't shared information about its plans for the fire and the site. He said he plans to re-engage federal, state and county agencies on the issue. PGW vowed in its statement to keep employees, neighbors and community leaders updated.