The bodies were found in an area they called the 'dog house'. 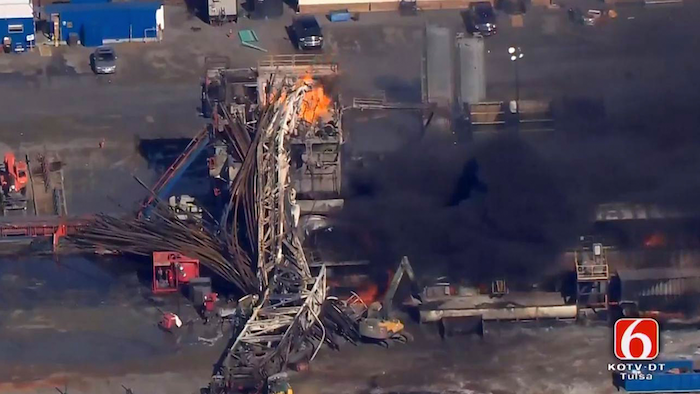 In this photo provided from a frame grab from Tulsa's KOTV/NewsOn6.com, fires burn at an eastern Oklahoma drilling rig near Quinton, Okla., Monday Jan. 22, 2018. Five people are missing after a fiery explosion ripped through a drilling rig, sending plumes of black smoke into the air and leaving a derrick crumpled on the ground, emergency officials said.
Christina Goodvoice, KOTV/NewsOn6.com via AP

OKLAHOMA CITY (AP) — Officials on Tuesday recovered the remains of five gas rig workers who had been missing since a fiery explosion in eastern Oklahoma a day earlier.

Pittsburg County Sheriff Chris Morris said once the natural gas drilling rig was stabilized following the blast and subsequent fires, employees from the state medical examiner's office went into the wreckage and recovered the bodies in about two hours.

"The bodies were located in the area where they were presumed to be working in, what they call the 'dog house,'" Morris said, referring to a room on the rig floor that generally serves as an office for the drilling crew.

He said state and federal investigators will work with the companies involved to determine how Monday's blast occurred.

An initial incident report into the explosion indicates there was an uncontrolled release of gas that caught fire and that a worker at the scene tried unsuccessfully to shut down the well.

The report, released Tuesday by the Oklahoma Corporation Commission, which regulates oil and gas operations in the state, is just an initial assessment, said agency spokesman Matt Skinner.

"The investigation is ongoing, and there will undoubtedly be more added to the report," Skinner said.

The workers who were killed include three from Oklahoma — Matt Smith of McAlester, Parker Waldridge of Crescent and Roger Cunningham from Seminole — and two from other states, Josh Ray of Fort Worth, Texas; and Cody Risk of Wellington, Colorado.

Morris, whose office was responsible for notifying the families of the workers who were killed, said it has been a difficult two days for everyone involved.

"I think you can imagine, they're not doing well," Morris said. "No law enforcement officer likes to do that. The family not knowing and feeling empty about where their loved ones are, it's a tough situation."

Three of the workers were employed by Houston-based Patterson-UTI Energy Inc. Company President and CEO Andy Hendricks pledged a full investigation into the explosion.

"We want to learn from this," Hendricks said. "We don't want this to happen again for anybody in our industry."

The explosion at the drilling site near Quinton, about 100 miles (160 kilometers) southeast of Tulsa, sent plumes of black smoke into the air and left a derrick crumpled on the ground. For much of Monday, emergency officials were unable to get near the rig because the fire was still burning. The fire was extinguished Monday night.

Authorities said 16 people who were on the site at the time of the blast escaped without major injuries. One person was airlifted to a hospital.

Nationwide, there were 101 oil and gas-related fatalities in 14 states in 2014, the most recent year for which data is available from the National Institute for Occupational Safety and Health. Most of those occurred in Texas, Oklahoma and North Dakota, all of which have robust industry activity.

Most fatal incidents involved workers from servicing companies, but drilling companies accounted for 27 fatalities, the second most of any oil and gas industry group, according to the study.

A total of 15 workers were killed in Oklahoma while working in mining, quarrying and oil and gas extraction jobs in 2014, including six that involved transportation incidents, according to the U.S. Department of Labor's Bureau of Labor Statistics.