The company has been fined nearly $367,000 for more than 140 safety violations 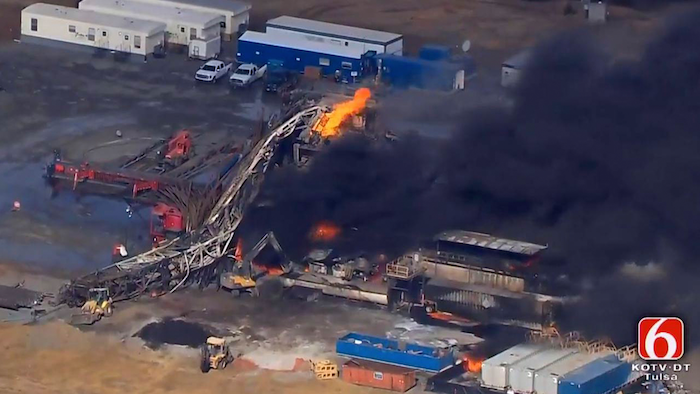 In this Jan. 22, 2018 file photo provided from a frame grab by Tulsa's KOTV/NewsOn6.com, fires burn at an eastern Oklahoma drilling rig near Quinton, Okla. Five people workers were killed after a fiery explosion ripped through a drilling rig, sending plumes of black smoke into the air and leaving a derrick crumpled on the ground, emergency officials said. Federal records show 10 workers have died over the past decade at well sites linked Patterson-UTI, the same driller involved in this week’s rig explosion.
Christina Goodvoice, KOTV/NewsOn6.com via AP

The company also was fined nearly $367,000 over the past 10 years for more than 140 safety violations, many of them serious.

"Patterson-UTI has embraced a culture of continuous improvement in safety, training and operations," the company said in a statement in response to questions about its safety record. "In recent years, we have invested millions of dollars on training and protective equipment and worked to instill a company-wide culture where safety is the top priority of each employee."

A 2008 report from a U.S. Senate committee described Patterson-UTI as one of the nation's worst violators of workplace safety laws. The report devoted an entire section to the company and 13 employees who died in Texas rig accidents over a nearly four-year period.

A separate AP analysis published in 2008 showed at least 20 Patterson-UTI employees died on the job between 2002 and 2007. No other oil and gas company had more than five fatal accidents during that span.

Federal and state investigators are working to determine what led to Monday's blast and resulting fires at the natural gas drilling site near Quinton, about 100 miles (160 kilometers) southeast of Tulsa. An initial incident report indicates there was an uncontrolled release of gas that caught fire and that a worker at the scene tried unsuccessfully to shut down the well.

The bodies of the five workers were recovered the next day in the rig's "dog house," a room on the rig floor that generally serves as an office for the drilling crew, authorities said.

Monday's explosion and rig fire appear to be the deadliest oil and gas industry accident since 2010, when 11 workers were killed after an explosion on BP's Deepwater Horizon rig in the Gulf of Mexico that triggered the biggest offshore oil spill in U.S. history.

Frank Branson, a Dallas-based plaintiff's attorney who specializes in catastrophic workplace accidents, said oil and gas operations are inherently dangerous and many companies are lax on safety, especially as energy prices go higher.

"When the oil patch gets really busy ... it's the time when the workers are most vulnerable," Branson said. "Unless the company preaches safety and requires it be conducted by their employees and management, there are going to be injuries and substantial deaths."

Branson said one of the problems that often leads to safety lapses is the difficulty energy companies have hiring experienced workers during an uptick in energy production.

"We've seen a lot of accidents occur because somebody on a crew had just joined the company and didn't know 'come here' from 'sic 'em,'" Branson said.