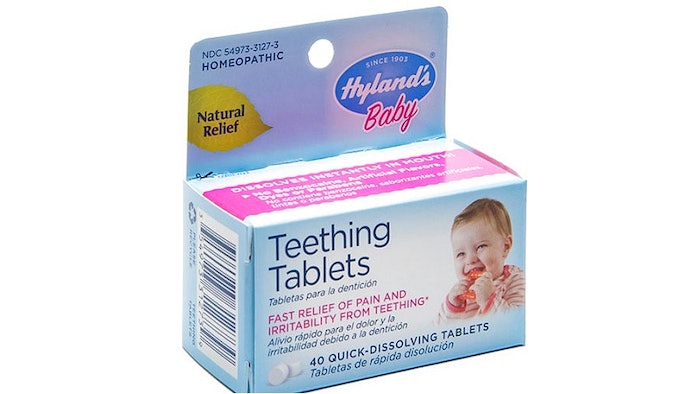 The maker of Hyland's teething tablets has issued a recall for any remaining packages at the urging of U.S. regulators, who say the medicine has inconsistent levels of a herb that can be poisonous.

Standard Homeopathic Co. of Los Angeles, stopped making and shipping the tablets last October. It said it's notifying distributors and stores to return any leftover products, while consumers should throw them out.

The Food and Drug Administration, which has been investigating the safety of such products for some time, had issued a warning in September that homeopathic teething tablets containing the herb, belladonna, shouldn't be used. Belladonna, also called nightshade, is a poisonous herb that nonetheless has been used at low dosages as a homeopathic medicine for centuries.

"FDA believes that belladonna represents a serious health hazard to children and that the effects of belladonna are unpredictable," the company said in its recall notice .

According to the FDA, some homeopathic teething products are made with very small amount of belladonna, but at levels so low they should not be detectible even with FDA's sophisticated testing. However, the agency found varying levels of belladonna when it tested Hyland's teething tablets, including some that far exceeded what was listed on the labels.

The company stopped making the tablets, but the FDA had been urging the company to issue a recall for months.

The FDA noted at the time that such tablets were sold online and in stores by Hyland's, pharmacy chain CVS and other companies. CVS promptly pulled from store shelves and stopped online sales of all belladonna-containing teething products, including its store brand and Hyland's.

FDA urged consumers to contact a doctor if young children who have used the teething tablets have symptoms including seizures, difficulty breathing, lethargy, skin flushing and agitation.