Some jewelry sold was nearly pure cadmium, which can cause cancer and reproductive harm after prolonged exposure. 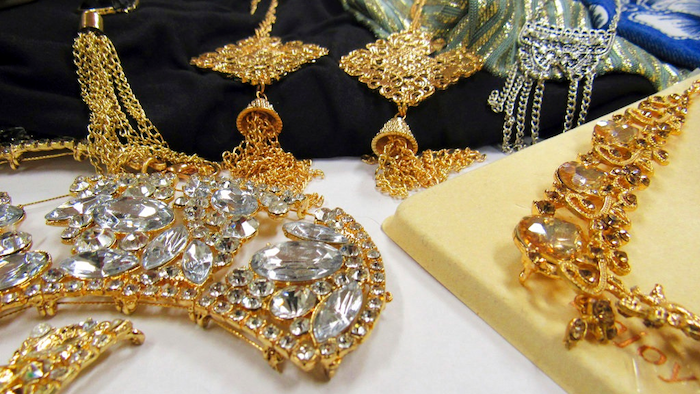 This Sept. 20, 2018, photo provided by the Center for Environmental Health (CEH) in Oakland, Calif., shows jewelry items loaded with the toxic metal cadmium they bought from the shelves of national retailers, at the center in Oakland. Testing shows jewelry loaded with the toxic metal cadmium is on the shelves of national retailers including Ross, Nordstrom Rack and Papaya. Testing done for CEH showed some jewelry sold with women's apparel was nearly pure cadmium. Extended exposure to cadmium can cause cancer and reproductive harm.
Center for Environmental Health via AP

LOS ANGELES (AP) — Jewelry with the toxic metal cadmium is showing up on the shelves of national retailers including Ross, Nordstrom Rack and Papaya, according to newly released test results.

Analysis done for the nonprofit Center for Environmental Health revealed some jewelry sold with women's dresses and shirts was nearly pure cadmium, which can cause cancer and reproductive harm after prolonged exposure.

Consumer advocates were hopeful cadmium had disappeared from the U.S. jewelry market following changes prompted by a 2010 Associated Press investigation that found Chinese manufacturers were using the metal to make kids' jewelry. States including California outlawed cadmium in children's jewelry, and testing by the center found the chemical had virtually disappeared from jewelry by 2012.

No laws address cadmium in adult jewelry, however, and last year the center decided to check those products. Lab testing found 31 adult jewelry items purchased from retail stores were at least 40 percent cadmium, and most were more than 90 percent, according to results shared exclusively with the AP.

California's law allows no more than 0.03 percent cadmium in children's jewelry. The precise health risk from the tested jewelry is unclear because researchers did not assess whether small amounts shed when the jewelry is handled and worn.

Over time, cadmium accumulates in the body and can damage the kidneys and bones. Most exposure happens by ingesting small amounts or by breathing it, most commonly through tobacco, which can contain cadmium. Researchers also have documented some absorption through skin contact, though the phenomenon is not well-studied.

Michael Harbut, a practicing doctor who as a university professor has researched cadmium's cancer-causing properties, noted that contact can trigger skin rashes including psoriasis.

The Oakland-based nonprofit bought all the test samples in the San Francisco Bay Area this year or last. The extent to which contaminated jewelry is in stores elsewhere isn't clear, though a national retailer would not typically limit a product to just one region.

The center said the problem should not be underestimated because of the limited market sampling.

"If you're the person that buys and is wearing that jewelry, you don't really care whether it's a common problem or a rare problem," said Caroline Cox, senior scientist at the center. "You have a problem."

Brent Cleaveland, executive director of the Fashion Jewelry and Accessories Trade Association, said he does not believe the test results suggest a larger problem. Most major retailers have a stringent system for testing and analyzing what they sell, he said.

Most of the tainted items were sold at Ross, which operates more than 1,400 stores in 38 states. One pendant from a necklace chain was 100 percent cadmium, according to the testing.

In a written statement, Ross said it is committed to protecting its customers and has "addressed this issue with our supplier." The retailer would not say whether it pulled suspect jewelry from stores.

The brands found with high cadmium levels in Ross stores include Tacera and Vibe Sportswear.

Xinwei Xie, chief executive officer at Trend Textile Inc., which owns Tacera, declined to comment when reached by phone. The Skate Group Inc., which owns Vibe Sportswear, did not respond to multiple requests for comment.

Papaya said it considers cadmium in its products a serious problem. It operates more than 100 retail locations nationwide.

Steven Kim, an attorney representing Papaya, said the company has recalled the products where contamination was found and stopped buying from the manufacturer in China.

"Our manufacturers are required to represent and warrant that their products are in legal compliance," Kim said. "Papaya is very strict and stops doing business with any manufacturer which fails to comply."

Nordstrom spokeswoman Emily Sterken said the company is "reaching out to these vendors to make them aware of the situation and get more information on these items."

The Center for Environmental Health has long used California law to force companies to reduce levels of harmful materials in consumer products, including cadmium and lead in jewelry.

Under the state's Proposition 65, businesses must inform consumers about significant exposures to chemicals that cause cancer or other reproductive harm. The nonprofit has settled Proposition 65 claims against 36 companies, including Gap Inc. and Target Corp., which agreed to not sell jewelry with more than 0.03 percent cadmium.

That limit for children's jewelry took effect after the AP reported in 2010 that some Chinese jewelry manufacturers were substituting cadmium for lead, the use of which Congress clamped down on following a string of imported-product safety scandals.

A Closer Look at QC