The Site of 'Atomic Man' Nuclear Accident is Demolished

Workers at the Hanford Nuclear Reservation have finished demolishing The McCluskey Room, named for the man who survived a horrifying accident that exposed him to high levels of radiation. 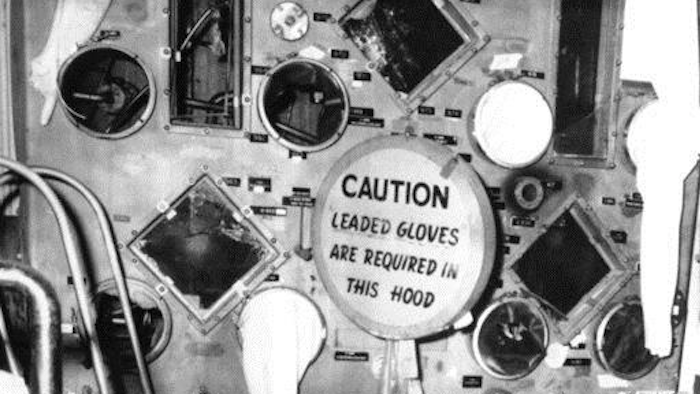 This 1976 file photo shows a room in which particles of radioactive material and glass flew into on the Hanford Nuclear Reservation in Richland, Wash., injuring one and exposing nine others to radioactivity. In March, 2017, workers have finished demolishing the space, now dubbed the McCluskey Room.
AP Photo/File

SPOKANE, Wash. (AP) — Workers at the Hanford Nuclear Reservation in Washington state have finished demolishing the site of a famous nuclear accident during the Cold War that exposed a man to the highest dose of radiation from the plutonium byproduct americium ever recorded, the U.S. Department of Energy announced Thursday.

The McCluskey Room was named for Harold McCluskey, who in 1976 survived the horrifying accident and died 11 years later of unrelated causes after becoming known as the Atomic Man.

A contractor recently demolished the room — the first of four main buildings that made up the Plutonium Finishing Plant complex that will be torn down.

"Completing demolition on this building was years in the making and is both historic and a significant risk reduction," said Tom Teynor, project director for the Department of Energy.

Hanford, located in southeastern Washington, began making most of the plutonium for the nation's nuclear arsenal during World War II.

Plutonium production has ended and the site is now engaged in a massive cleanup of nuclear waste. That work is expected to take decades and cost tens of billions of dollars.

One of the most heavily contaminated portions of the site — half the size of Rhode Island — is the Plutonium Finishing Plant, where plutonium was converted into hockey puck-shaped disks and shipped to factories where nuclear weapons were assembled.

The 64-year-old McCluskey was working in the plant on Aug. 30, 1976, when a chemical reaction in his glove box produced an explosion that blew out the glass and contaminated him. A glove box is a device in which people use large gloves to handle dangerous materials that are under glass.

McCluskey was exposed to 500 times the occupational standard for americium-241. He was struck by a mixture of nitric acid, broken glass, americium and other materials.

After the explosion, he had his clothing removed, was washed with water and transferred to a decontamination facility where he was washed again and given medicine to purge the radioactivity.

Because of the risk of exposure to other individuals, McCluskey was placed in isolation in the Hanford Emergency Decontamination Facility for five months.

By then, his body's radiation count had fallen by about 80 percent and he was released.

McCluskey's friends avoided him, and his minister finally had to tell people it was safe to be around him.

McCluskey largely avoided the media, but he did speak in favor of developing nuclear power.

He died on Aug. 17, 1987, at 75, of coronary artery disease. He had the disease before the accident, and an autopsy found no signs of cancer.