"My opinion is they're still dumping radioactive waste," said one Russian environmental activist, "but proving that is impossible." 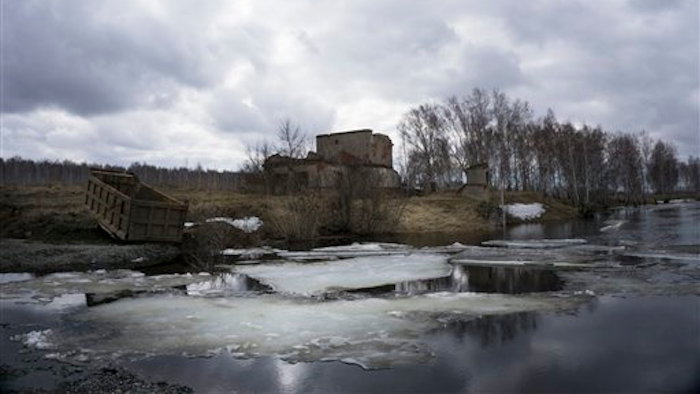 Mayak is a nuclear complex that has been responsible for at least two of the country’s biggest radioactive accidents. Worse, environmentalists say, is the facility’s decades-old record of using the Arctic-bound waters of the Techa River to dump waste from reprocessing spent nuclear fuel, hundreds of tons of which is imported annually from neighboring nations.
AP Photo/Katherine Jacobsen

MUSLYUMOVO, Russia (AP) — At first glance, Gilani Dambaev looks like a healthy 60-year-old man and the river flowing past his rural family home appears pristine. But Dambaev is riddled with diseases that his doctors link to a lifetime's exposure to excessive radiation, and the Geiger counter beeps loudly as a reporter strolls down to the muddy riverbank.

Some 50 kilometers (30 miles) upstream from Dambaev's crumbling village lies Mayak, a nuclear complex that has been responsible for at least two of the country's biggest radioactive accidents. Worse, environmentalists say, is the facility's decades-old record of using the Arctic-bound waters of the Techa River to dump waste from reprocessing spent nuclear fuel, hundreds of tons of which is imported annually from neighboring nations.

The results can be felt in every aching household along the Techa, where doctors record rates of chromosomal abnormalities, birth defects and cancers vastly higher than the Russian average — and citizens such as Dambaev are left to rue the government's failure over four decades to admit the danger.

"Sometimes they would put up signs warning us not to swim in the river, but they never said why," said Dambaev, a retired construction worker who like his wife, brother, children and grandchildren have government-issued cards identifying them as residents of radiation-tainted territory. "After work, we would go swimming in the river. The kids would too."

Thousands already have been resettled by Russia's Rosatom State Atomic Energy Corp. to new homes two kilometers (a mile) inland from the river, leaving Dambaev's village of Muslyumovo in a state of steady decay as shops close and abandoned homes are bulldozed. The evacuations began in 2008, two decades after Russia started to admit disasters past and present stretching from Mayak's earliest days in the late 1940s as the maker of plutonium for the first Soviet atomic bombs.

The question, 30 years after the former Soviet Union's greatest nuclear disaster in Chernobyl, is whether Mayak is truly cleaning up its act or remains primed to inflict more invisible damage on Russians. Nuclear regulators say waste no longer reaches the river following the last confirmed dumping scandal in 2004, but anti-nuclear activists say it's impossible to tell given the level of state secrecy.

Vladimir Slivyak, an activist for the Russian environmentalist group EcoDefense, has visited villages downstream from Mayak many times to help document the poor health of locals in the area, 1,400 kilometers (870 miles) east of Moscow near Russia's border with Kazakhstan.

The Nuclear Safety Institute at the Russian Academy of Sciences, which oversees safety standards for the country's nuclear industry, told the AP that Mayak's nuclear waste processing system presents no danger to the surrounding population. The plant also manufactures a range of radioactive isotopes of use for specialist equipment, medical research and cancer treatments that generate lucrative contracts worldwide.

Rosatom spokesman Vladislav Bochkov, in response to several Associated Press requests seeking an interview to discuss Mayak's safety standards and operations, sent an email Thursday denying Mayak dumps nuclear waste in the river. Bochkov said the complex "follows all the environmental protection guidelines and has all the approvals it needs for operation."

"The level of pollution in the Techa River today completely complies with the sanitary standards of the Russian Federation," he wrote. He said the river water is clean: "You can drink it endlessly."

But when the AP took a Geiger counter to the riverbank outside Dambaev's home, the meter reading surged at the water line and the machine began beeping loudly and continuously. Measurements ranged from 8.5 to 9.8 microsieverts — 80 to 100 times the level of naturally occurring background radiation. A typical chest X-ray involves a burst of about 100 microsieverts.

Nuclear Safety Institute member Leonid Bolshov bills these levels as safe, saying: "The level of pollution in the water today is incomparably less to what it used to be."

What it used to be is pretty bad. Environmentalists estimate that Mayak tossed 76 million cubic meters (2.68 billion cubic feet) of untreated waste — enough to fill more than 30,000 Olympic-sized swimming pools — into the river from 1948 to the mid-1950s as nuclear scientists scrambled to catch up to the U.S. nuclear program.

In September 1957, underground storage tanks of overheating nuclear waste exploded, sending a cloud of nuclear fallout 300 kilometers (200 miles) northeast across 217 towns and villages containing 272,000 people, a minority of which were quietly evacuated over the following two years.

A decade later, a nearby lake used to dispose of nuclear waste dried up amid a summer drought, and high winds whipped the exposed powdery residue to many of the same population centers. Greenpeace estimates the fallout reached 68 towns and villages containing 42,000 people.

Russia suppressed all news of both disasters until the late 1980s, when it acknowledged the two accidents and the Mayak site's very existence.

In 1993, Russia said the two accidents combined with longer-term dumping of waste into the river meant that an estimated 450,000 people had been exposed to excess radiation from Mayak. It offered no breakdown of immediate deaths, accelerated deaths or increased rates of illness and disease in the populace.

A 2005 criminal case against Mayak's then-director, Vitaly Sadovnikov, revealed that the plant continued to dump at least 30 million cubic meters (1 billion cubic feet) of untreated nuclear waste into the river from 2001 to 2004. Prosecution documents said the dumping quadrupled the volume of the radioactive isotope strontium-90 in the river.

A decades-long Radiation Research Society study of people living near the Techa River conducted jointly by Russian and American scientists has linked radiation particularly to higher rates of cancer of the uterus and esophagus. In their latest 2015 report, the scientists analyzed 17,435 residents born before 1956, among them 1,933 with cancer. They found that the vast majority of residents had accumulated heightened deposits of strontium-90 in their bones and such "radiation exposure has increased the risks for most solid cancers."

Such figures come as no surprise to one of Muslyumovo's longest-serving doctors, Gulfarida Galimova, a gynecologist and family general practitioner who started work in the village's hospital in 1981. Galimova says she was immediately struck by the exceptional volume of pediatric emergencies involving miscarriages, early and still births, and newborns with malformed limbs and other defects.

Still, like others she did not know Mayak —unmarked on any map at the time and still off-limits to the public today — even existed. She recalls 1980s mornings of blissful ignorance washing her hair in the deceptively soft waters of the Techa.

"The water was nice and not calcified. Soft water. Your hair would be so fluffy," Galimova recalled.

She was among some 280 households that accepted Rosatom's offer to abandon their homes in Muslyumovo for new two-story homes away from the river in what today is called New Muslyumovo. But her 2012 move came too late for her own family. A son born in the village in 1985, and a grandson born last year, both have birth defects that she blames on Mayak radiation. Her son has a club foot; her grandson has heart deformities.

One of her neighbors in New Muslyumovo, with its rows of pastel yellow homes with red roofs, blames the new location for her family's health problems. Alfia Batirshina, 28, says a radon deposit beneath the topsoil of the new settlement gives her chronic headaches and her 8-year-old daughter recurring nosebleeds.

She is loath to discuss her daughter's own birth defect, a deformed leg, and keeps her out of view of journalists. Her 62-year-old father, Vakil Batirshin, struggles to say anything at all. His neck is painfully swollen from lymph nodes that have grown triple their normal size, leaving his words nearly unintelligible.

The homemaker says she and neighbors are resigned to their medical fate living in Mayak's nuclear shadow.

"I don't hope for anything anymore," she said. "If we get sick, we get sick."

Site of Nuclear Accident is Demolished

A House committee pinned two crashes on the "horrific culmination" of failed oversight, design flaws and a lack of action at Boeing.
Sep 16th, 2020

The move that comes days after the study was suspended following a reported side-effect in a U.K. patient.
Sep 14th, 2020

The company is inspecting part of the tail after finding that pieces were clamped together too tightly.
Sep 9th, 2020
Follow Us
Most Recent