The lawsuit, filed Friday against Boeing, names seven malfunctions that could have contributed to the crash that killed 44 people. 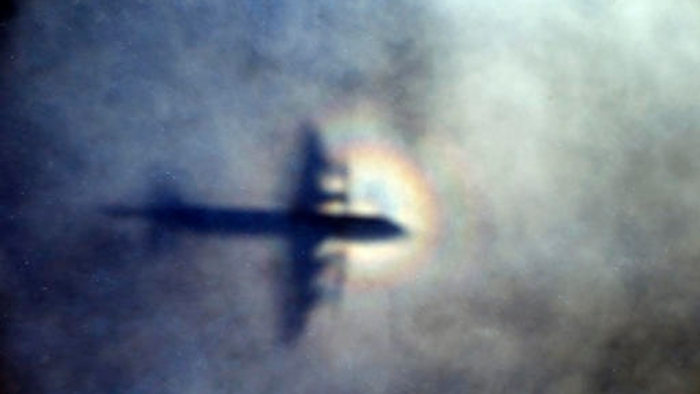 FILE - In this March 31, 2014 file photo, the shadow of a Royal New Zealand Air Force P3 Orion is seen on low level cloud while the aircraft searches for missing Malaysia Airlines Flight MH370 in the southern Indian Ocean, near the coast of Western Australia. A series of catastrophic electrical and other failures may have led to the crash of Flight 370 over the Indian Ocean, according to a lawsuit filed Friday, March 3, 2017, in the U.S. on behalf of the families of 44 people on board the still missing plane.
AP Photo/Rob Griffith, File

COLUMBIA, S.C. (AP) — A series of catastrophic electrical and other failures may have led to the crash of Malaysia Airlines Flight 370 over the Indian Ocean, according to a lawsuit filed in the U.S. on behalf of the families of 44 people on board the still missing plane.

The lawsuit, filed Friday against Boeing in U.S. District Court in South Carolina, names seven malfunctions, from an electrical fire to depressurization of the plane's cabin, that could have led to the crew losing consciousness, the plane's transponder stopping its transmission and the plane flying undetected until it crashed after running out of fuel.

The suit was filed by Gregory Keith, a special administrator for families who lost loved ones on the flight. It names 44 victims as plaintiffs.

The lawsuit was filed in South Carolina because Boeing has built a massive new plant in the state to build the 787 Dreamliner. Flight 370 was a Boeing 777 and the lawsuit doesn't say where it was made.

Boeing doesn't comment on pending lawsuits, but the company's thoughts continue to be with the people who died on Flight 370, Boeing spokesman Tom Kim said in a statement.

One lawyer representing the Flight 370 families is Mary Schiavo, former inspector general of the U.S. Department of Transportation. She did not respond to an email seeking comment.

The jet disappeared March 8, 2014, while flying from Kuala Lumpur to Beijing with 239 people on board. Malaysia, Australia and China suspended a nearly three-year search in the southern Indian Ocean on Jan. 17 after failing to find any trace of the plane.

The lawsuit notes that search efforts for the plane have ended and says the lack of finality has led to unprecedented levels of "economic and non-economic losses, emotional and physical pain, distress and mental pain and suffering" for the people on the airliner and their families. It does not ask for a specific amount of damages.

Boeing also didn't use available technology on its 777 planes that would have allowed them to be tracked at all times and made the flight and cockpit voice recorders easier to find, the lawsuit says.

Boeing knew of design flaws on the aircraft, including defective wiring near combustible sources like the emergency oxygen supply to the plane's crew, it says.

"The defects caused and/or allowed a massive and cascading sequence of electrical failures onboard the lost plane which disabled vital systems ... making it impossible for the crew to navigate the plane or for the plane to communicate with the ground stations leaving the aircraft to fly without the ability to communicate or control the aircraft until the plane ran out of fuel," lawyers wrote in the lawsuit.

Victims' families have filed other lawsuits as well.

Among them, in March last year, a day before the deadline for litigation against Malaysia Airlines, 12 Chinese families whose relatives were aboard the flight filed a lawsuit in Beijing. It also named Boeing and jet engine manufacturer Rolls-Roys among the defendants. Another lawsuit on behalf of the families of 32 passengers was filed in Kuala Lumpur.

A month before, a Malaysian woman and her two young sons sued the airline seeking damages of $7.6 million for the loss of her husband, S.Puspanathan. An Australian-based woman, Jennifer Chong, whose husband Chong Ling Tan was on the flight, filed similar claims in Australia, alleging the airline was negligent in failing to ensure passengers' safety.

The families of four more Australian passengers are seeking $200,000 compensation from Malaysia Airlines, according to documents filed in the Federal Court of Australia in April 2016.

In June 2016, two Malaysian boys whose father, Jee Jing Hang, was a passenger secured an out-of-court settlement in the first legal case against Malaysia Airlines and the government.