The air bags have been linked to seven deaths in Malaysia alone. 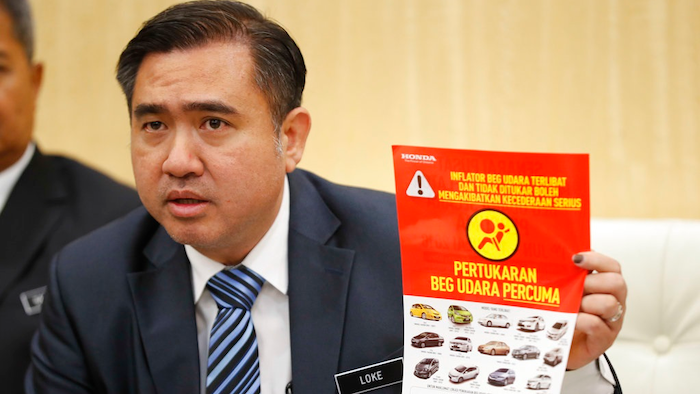 Malaysian Minister of Transport Anthony Loke speaks during a press conference in Putrajaya, Malaysia, Tuesday, June 5, 2018. Malaysia's Transport Minister says the government will take on an active role in an auto recall to replace flawed Takata air bags after data from eight car manufacturers showed that more than 350,000 car owners have not responded.
AP Photo/Sadiq Asyraf

KUALA LUMPUR, Malaysia (AP) — Malaysia's transport minister said Tuesday that the government will take an active role in recalls to replace flawed Takata air bags after data from eight car manufacturers showed that more than 350,000 car owners have not responded.

The deaths of seven people in Malaysia have been linked to the defective air bags that are subject to one of the world's largest auto recall. The latest victim was a 23-year old student whose 2004 Honda City crashed May 27 in Kuala Lumpur, the second death this year alone.

Transport Minister Anthony Loke said the Road Transport Department will take over from auto manufacturers in sending recall notices to affected car owners. He said that two reminders will be sent and car owners who still fail to respond will face fines and be barred from renewing their road registrations.

Such radical measures are needed to raise awareness due to the lackadaisical attitude of some Malaysians, he said.

"We are not here to penalize anybody. We just want to make sure everyone changes their airbags for their own safety because the cars have been recalled," he told a news conference after meeting with the car manufacturers.

Regarding the latest fatality, Loke said Honda sent 28 recall notices to the victim's family but failed to reach them because they had moved without updating their address. He said the road department will work with insurance companies to track down such owners.

All seven deaths in Malaysia involved the Honda City, a subcompact model made for Asia and Europe. Families of some Malaysian victims have blamed Honda, the leading foreign brand in the country, of not doing enough to warn car owners of potentially deadly risks from the air bags or track down second-hand car owners.

Loke said Honda has completed 79 percent of its recall, the highest so far in the industry.

Automakers have been told to work together to raise awareness about the flawed air bags since earlier company campaigns have been ineffective.

Honda will have until the year's end to complete its recalls, since all the accidents so far involved Hondas. Other manufacturers will be given a year.

"This is a four-year problem that is not resolved ... we want 100 percent compliance but it takes time," Loke added.

The latest Malaysian death raised the global death toll linked to the defect to 23. The U.S., with 15 deaths, and Australia with one are the only other countries to have reported such fatalities. The defective air bags have faulty inflators and propellant devices that may deploy improperly in an accident, shooting out metal fragments that can kill or injure.

Last year, Takata pleaded guilty to fraud in a U.S. court and agreed to pay more than $1 billion in penalties for concealing the defect. Various lawsuits are pending in U.S. courts against Takata, including several class action lawsuits that allege automakers knew about the dangers of the defective air bags ahead of the recalls. Takata has since been bought over by Chinese-owned U.S. mobility safety company Key Safety System.

Takata Recall Could More Than Double