Dam Problems: What We Know So Far

What went wrong at the nation's tallest dam, and is it safe yet?

Paul Elias
A helicopter carries sandbags in the direction of a damaged dam Wednesday, Feb. 15, 2017, in Oroville, Calif. The Oroville Reservoir is continuing to drain Wednesday as state water officials scrambled to reduce the lake's level ahead of impending storms.
AP Photo/Marcio Jose Sanchez

It's been more than a week since engineers at the nation's tallest dam noticed damage to its emergency spillway, launching a series of events that culminated with the threat of catastrophic flooding and the two-day evacuation of nearly 200,000 California residents downstream.

Officials said Thursday that they are confident the lake behind Oroville Dam will keep draining despite storms expected to dump several inches of rain in the coming days.

Here's what we know:

Straddling the Feather River, the dam created Lake Oroville in rural Northern California in 1968. The reservoir is a major water supplier for farmers in the agricultural-rich Central Valley and residents in Southern California.

There are two primary ways workers drain water from the lake. They can control the flow of water downriver by opening a gate to the dam's main concrete spillway or divert water through a nearby power plant. The dam also is equipped with an emergency spillway.

The emergency spillway is an earthen structure — a big hill — with a 30-foot concrete wall on top. It is several feet lower than the main dam, and water will flow over it uncontrollably when the lake is over capacity. Water had never flowed over the emergency spillway until Saturday.

Engineers noticed an odd flow pattern on the main concrete spillway Feb. 7 and shut off the water to investigate. They discovered a large crater in the bottom.

Despite heavy rain and melting snow, engineers slowed releases later in the week after the hole grew. Compounding matters, concrete from the eroding hole clogged the power plant's exit channel and forced it to shut down.

The cause of the hole remains unknown. A report prepared Feb. 11 by a CalFire official suggested heavy rain may have contributed.

Engineers determined the hole couldn't immediately be fixed and decided to keep using the damaged spillway with reduced flows. The next day, it rained harder than expected, and a day later, water was flowing in almost twice as fast as it was draining.

Water flowed over the emergency spillway at 8 a.m. Sunday when the lake reached capacity, but officials kept telling the public there was no threat until as late as noon Sunday.

A few hours later, engineers determined the hillside was eroding faster than expected, undermining the concrete wall. Officials feared it was about to collapse and cause a catastrophic flood.

Officials flowed more water through the damaged concrete spillway in a frantic bid to lower the reservoir. Lake levels fell enough that water stopped pouring over the emergency spillway about four hours after the evacuation order.

Crews worked to dump thousands of tons of rocks to shore up the damaged spillways.

Butte County Sheriff Kory Honea announced Tuesday afternoon that residents could return home after the repairs and the lake's lowered levels. He conceded the evacuation was "chaotic" but defended the decision as "better safe than sorry."

"I'm not sure anything went wrong," Department of Water Resources acting chief Bill Croyle said of the near-failure of the emergency spillway. "This was a new, never-happened-before event."

Environmental groups demanded 12 years ago that the hillside be paved with concrete to prevent erosion. But federal regulators decided against ordering the work after state water agencies argued it would cost too much for a structure that, at that point, had never been used.

Croyle said he's confident the dam and primary spillway can handle rainfall from three storms rolling into the region this week. He said more water is leaving the lake than entering it and it can handle storm runoff and melting snow.

The emergency spillway also has been repaired enough to handle any overflow, Croyle said. Officials identified three areas where erosion caused the most concern of potential flooding, including one spot that was completely fixed, he said. The others were partially repaired.

The temporary fixes will last beyond snow melting this spring, and officials will then make long-term repairs, the water agency said.

Nonetheless, the sheriff told residents to prepare for another evacuation if the situation worsens. 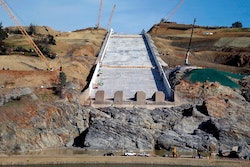 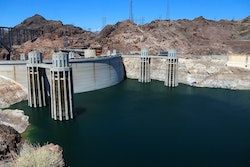 L.A. Wants to Use Hoover Dam as Giant Battery 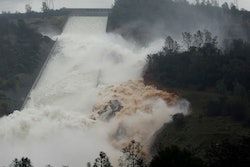