The total is $250 million over projections and could go higher. 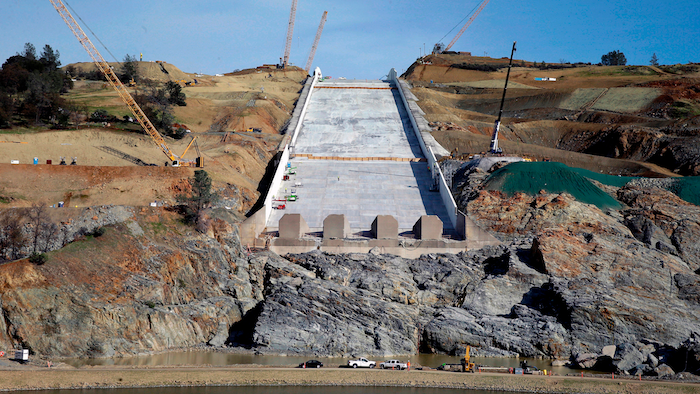 In this Nov. 30, 2017, file photo, work continues on the Oroville Dam spillway in Oroville, Calif. Officials say the cost of dealing with last year's near-disaster at the nation's tallest dam in California have climbed to more than $1 billion. The state Department of Water Resources said Wednesday, Sept. 5, 2018, construction costs and related expenses are driving the increase at Oroville Dam.
AP Photo/Rich Pedroncelli, File

SAN FRANCISCO (AP) — The cost of repairs and other improvements stemming from last year's near-disaster at the nation's tallest dam is $1.1 billion, a staggering total nearly $250 million over projections at the start of the year and that could go higher, California officials said Wednesday.

Recent additions to crews racing to meet a Nov. 1 deadline to fix spillways at Oroville Dam before winter rains arrive is the primary cause of the increase, the state Department of Water Resources said.

Both spillways at the dam crumbled and fell away during heavy rains in early 2017, prompting fears of a catastrophic dam collapse.

Water officials had assured the public for days leading up to the failures that the dam could handle rising waters amid persistent and heavy rains.

Then on Feb. 12, 2017 — a Sunday afternoon — officials ordered an immediate evacuation, saying the dam could collapse within an hour.

The panic of the sudden evacuation turned into frustration and anger when many of the evacuees found themselves stuck in gridlocked traffic hours after fleeing the danger zone.

Residents were allowed home a few days later after water behind the dam receded and the danger passed.

Nonetheless, state water officials were left with a massive construction project to make the dam safe.

The department initially awarded a $275 million contract to a private contractor in April 2017 to make the repairs. Five months later, the cost estimate soared to $500 million and then to $870 million in January.

The water agency plans to ask the Federal Emergency Management Agency to pay for 75 percent of the repair costs after the project is finished. The rest would be borne by State Water Project customers.

FEMA could reject all or portions of reimbursement requests if it determines the crisis was caused by poor maintenance, agency spokeswoman Brandi Richard said.

That was one of several factors to blame, according to independent engineers previously hired by the state water agency.

Their lengthy report also concluded in January that state water officials were "overconfident and complacent" about the dam's condition and gave "inadequate priority for dam safety."

The report "clearly stated that the incident couldn't have been prevented based on what was current practices on inspections and evaluations," she said during a conference call with reporters Wednesday.

FEMA has so far contributed $87 million to help with the cost of the $160 million response. Another $45 million is expected.