The plant has also had other incidents, including a small explosion in February, as well as a 2002 explosion and fire that damaged the plant's distillery and injured a few people. 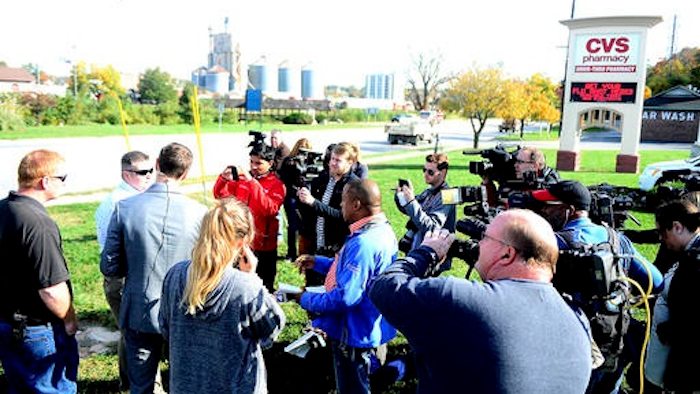 Trey Cocking, the city manager of Atchison, Kan., addresses the media outside of the CVS Pharmacy after a chemical incident occurred at the MPG Ingredients plant on Friday Oct. 21, 2016, in Atchison, Kan The Kansas Department of Emergency Management said multiple people who suffered respiratory problems because of the noxious cloud that formed were taken to hospitals. Their conditions have not been released.
Dougal Brownlie/The St. Joseph News-Press via AP

ATCHISON, Kan. (AP) — A chemical spill at a northeast Kansas distilling plant released a noxious cloud of fumes Friday, forcing temporary evacuations and sending dozens of people to the hospital, including two who were in intensive care, officials said.

Most of the people who went to hospitals had been released by Friday afternoon.

The spill occurred at the MGP Ingredients plant in Atchison, according to Katie Horner, spokeswoman for the Kansas Department of Emergency Management. She said the spill occurred as two chemicals, sulfuric acid and sodium hypochlorite, were mistakenly combined at the plant, which produces premium distilled spirits and employs about 300 people.

When the two chemicals combine they can release chlorine gas, according to the Environmental Protection Agency.

Homes and schools near the plant had been evacuated early Friday, but city officials gave the all clear for residents to return before noon. Atchison has about 11,000 residents and is about 50 miles northwest of Kansas City.

"The threat is really over, and it's safe to be outside," said Becky Berger, assistant city manager. She advised residents to air out homes that smell like a swimming pool.

Sixty-seven people sought medical attention at the Atchison Hospital emergency room, spokeswoman T.C. Roberts said, and one person remained in stable condition in intensive care late Friday afternoon. Most had been released, but two other people were admitted to the hospital.

Mosaic Life Care in nearby St. Joseph, Missouri, also treated about 18 people, including one who remained in ICU Friday afternoon, said Joey Austin, hospital spokeswoman. All the others were released.

The regional EPA office said it was supporting state and local emergency crews and had sent a coordinator to the site to assess the situation.

"The one thing we had on our side was that the winds were enough to make it disperse," he said.

Pinpointing the cloud's direction proved to be a guessing game while it was still in Atchison. As one school building's students sought shelter in the gymnasium, students in the other three buildings were shuttled in buses first toward a Wal-Mart before being redirected to the local airport, schools Superintendent Susan Myers said. The buses were eventually directed again to Wal-Mart, she said.

"They were trying to figure out the wind, where this cloud was going. It was a very fluid situation," she said. "I would say it was very anxiety-provoking to have this kind of situation. I'm sure this was an adventuresome day for everyone."

The MGP plant has also had other incidents, including a small explosion in another building in February where no injuries were reported, City Manager Trey Cocking said. The plant was also the site of a 2002 explosion and fire that damaged the plant's distillery and injured a few people.

The Kansas Department of Health and Environment said that since 2006 the company has faced more than $50,000 in penalties for issues including exceeding its air pollution cap and failing to install emissions devices. The company is currently in full compliance, according to the department.