Residents would receive $525 each as part of the settlement. Their water was unusable for up to nine days. 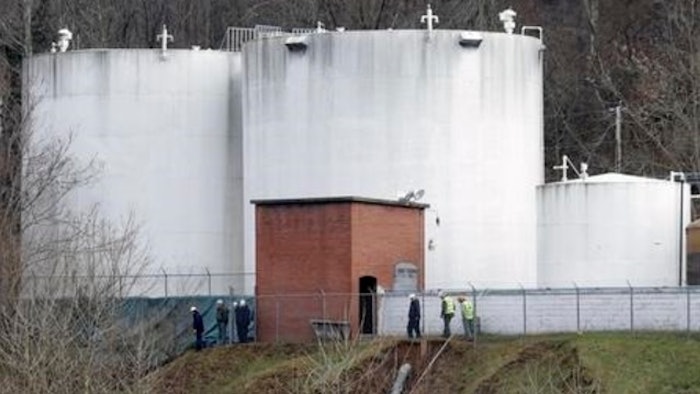 In this Monday, Jan. 13, 2014, file photo, workers inspect an area outside a retaining wall around storage tanks where a chemical leaked into the Elk River at Freedom Industries storage facility in Charleston, W.Va. A federal judge is expected to hear details, Monday, Oct. 31, 2016, of a potential tentative settlement between a water company and plaintiffs who sued over the company's handling of a 2014 chemical leak in southern West Virginia.
AP Photo/Steve Helber, File

CHARLESTON, W.Va. (AP) — Residential customers and small businesses could receive thousands of dollars under a proposed settlement with the companies sued for a chemical spill and resulting water crisis in West Virginia's capital area three years ago.

If the federal court approves, the settlement filing shows West Virginia American Water would pay up to $126 million and Eastman Chemical $25 million.

Residents would receive $525 each and small businesses would receive $6,250 each. Affected renters and homeowners could claim $170 for each additional person living in their household, plus medical expenses and repairs.

Larger businesses could get from $12,500 to $40,000 for lost revenue and documented property damages. Affected nonprofits and government entities would get $1,875.

Thousands of gallons of a coal-cleaning agent leaked from now defunct Freedom Industries' storage tank into the Elk River in January 2014, leaving about 300,000 people without water for up to nine days.

The proposed settlement specifies that neither West Virginia American Water nor Eastman Chemical admit any liability for the spill.

The case targeted the companies for their roles in the contamination of the region's drinking water following the Jan. 9, 2014, chemical spill at the Freedom Industries Etowah Terminal. The facility, now closed and torn down, was located 1.5 miles (2.5 kilometers) upstream from West Virginia America's regional drinking water intake on the Elk River.

Lawyers for residents and businesses alleged West Virginia American did not adequately prepare for or respond to the spill. They claimed Eastman did not properly warn Freedom of the dangers of its chemical or take any action when Eastman officials learned the Freedom facility was in disrepair.

More than 224,000 area residents, more than 7,300 business owners and an undetermined number of hourly "wage earners" were part of the class of plaintiffs in the suit. Idled workers can claim lost pay.