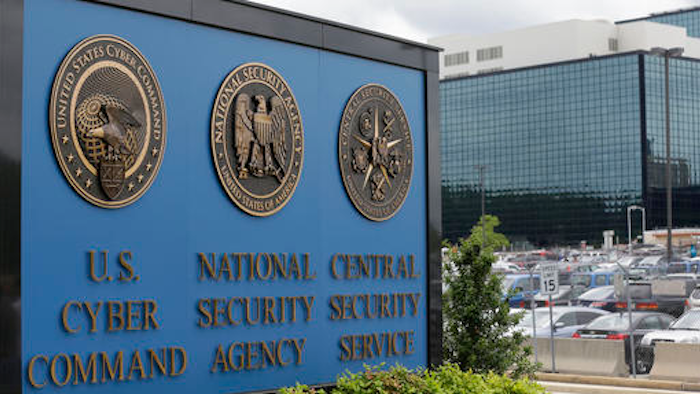 WASHINGTON (AP) — A former National Security Agency contractor's theft of top secret government information was "breathtaking in its longevity and scale," federal prosecutors said in a court filing Thursday aimed at keeping the man locked up as the case moves forward. They said he took enough classified material to fill roughly 200 laptop computers.

The Justice Department also said it anticipated bringing additional charges against Harold T. Martin III, including charges under the Espionage Act, which would expose him to far harsher penalties if convicted. It described the evidence against him as "overwhelming" and said Martin admitted to investigators that he was illicitly storing classified materials.

The court papers offered new details about the enormous volume of information prosecutors believe Martin stole and revealed the Justice Department's concern that Martin is or could be in contact with a foreign government. Prosecutors said Martin has had online communication in Russian and — raising the specter of a situation akin to previous NSA leaker Edward Snowden — said that if Martin were freed he "could seek refuge with a foreign government willing to shield him from facing justice."

"Given the nature of his offenses and knowledge of national secrets, he presents tremendous value to any foreign power that may wish to shelter him within or outside of the United States," prosecutors said.

A detention hearing was scheduled for Friday afternoon in Baltimore. Martin's attorneys said he never intended to betray his country and does not pose a danger or flight risk. They said Martin, a former lieutenant in the U.S. Navy, does not have a valid passport and dismissed as "fantastical scenarios" concerns that he might flee.

Martin was arrested at his Maryland home in August around the same time as federal officials acknowledged an investigation into a cyberleak of purported hacking tools used by the NSA. Those documents were leaked by a group calling itself the "Shadow Brokers," but there is nothing in court filings that explicitly connects Martin to that group.

Prosecutors said agents who searched Martin's home and car seized dozens of computers and electronic devices, then found classified government materials from 1996 to 2016 and some 50 terabytes of information — or enough to fill 200 laptops. One document marked as "Top Secret/Sensitive Compartmented Information" included "specific operational plans against a known enemy of the United States," according to the court filing.

The information includes an email chain marked as "Top Secret" that appeared to have been printed from an official government account. On the back of the document, prosecutors said, were handwritten notes describing the NSA's classified computer infrastructure. The notes, which include basic concepts about classified information, appear "intended for an audience outside of the Intelligence Community," the government said.

Prosecutors also cited Martin's use of technologies designed to encrypt communication and allow for online anonymity. They said Martin, who had been trained in computer security and at the time of his arrest was enrolled in a doctoral program on information security management, appeared to be trying to connect to the internet anonymously using a specialized operating system.

The government was likely referring to Tails, a Linux-based operating system that appears similar to Microsoft Windows — but makes web browsing practically anonymous. It also vanishes once the computer restarts.

Because systems like Tails direct internet traffic through a global network called Tor, it's harder for authorities to trace a user's internet address or capture identifying information about them. The operating system and the Tor network itself are largely used by journalists, activists and others who have a safety interest in keeping their web browsing habits a secret.

Martin, a former contractor at Booz Allen Hamilton, had access to classified information since 1996, the government said.

His arrest was a further blow to the NSA, coming three years after Snowden — another NSA contractor who also worked at Booz Allen — disclosed to journalists details about government surveillance programs. Snowden, who now lives in Moscow, was charged in his absence under the Espionage Act.

"The evidence is overwhelming that the defendant abused this trust and chose to repeatedly violate his agreements, his oaths and the law_and to retain extremely sensitive government information to use however he wished," prosecutors said.