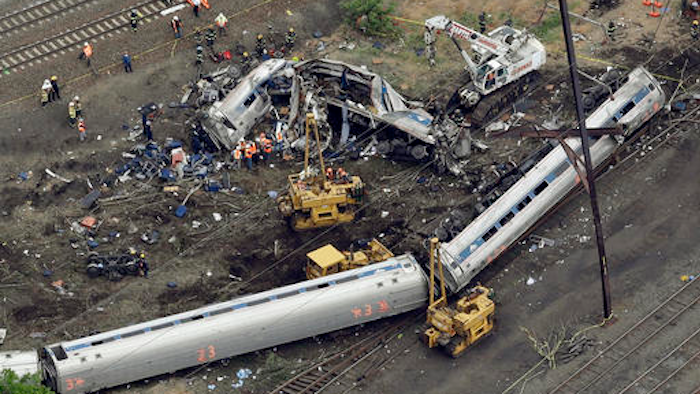 In this Wednesday, May 13, 2015 file photo, emergency personnel work at the scene of a derailment in Philadelphia of an Amtrak train headed to New York. Many commuter and freight railroads have made little progress installing safety technology designed to prevent deadly collisions and derailments despite a mandate from Congress, according to a government report released Wednesday, Aug. 17, 2016.
AP Photo/Patrick Semansky, File

WASHINGTON (AP) — Many commuter and freight railroads have made little progress installing safety technology designed to prevent deadly collisions and derailments despite a mandate from Congress, according to a government report released Wednesday.

The technology, called positive train control or PTC, uses digital radio communications, GPS and signals alongside tracks to monitor train positions. It can automatically stop or slow trains to prevent them from disobeying signals, derailing due to excessive speed, colliding with another train or entering track that is off-limits.

The Federal Railroad Administration report shows that while some railroads have made substantial progress, others have yet to equip a single locomotive or track segment with the technology, or install a single radio tower.

Congress passed a law in 2008 giving railroads seven years to put the technology in place, and last year extended that deadline for three more years after railroads said they were unable to meet the first deadline. The law extending the deadline to Dec. 31, 2018, also allows the railroad administration to grant additional extensions for two more years to railroads that have installed PTC but are still testing the systems.

Railroads shouldn't wait for the deadline to complete their work on PTC, said Sarah Feinberg, head of the railroad administration.

"Every day that passes without PTC, we risk adding another preventable accident to a list that is already too long," she said in a statement.

So far, PTC is in operation on nine percent of freight route miles and 22 percent of passenger train miles, the report said.

The Southeastern Pennsylvania Transportation Authority, which operates commuter trains in the Philadelphia region, has equipped all its locomotives, installed all its radio towers and completed all its track segments. But nearby New Jersey Transit Rail, which carries an average of 308,000 passengers on weekdays, hasn't equipped any locomotives, installed any radio towers or completed any track segments.

The report also gave zeros in each of those categories to New York's largest commuter railroads, the Metro-North and the Long Island railroads. In 2013, a speeding Metro-North train derailed while going around a curve in the Bronx. Four people were killed and more than 60 injured. The National Transportation Safety Board said the accident could have been prevented if PTC had been in operation.

The report is based on information supplied by the railroads.

The report "is an overall summary that does not convey the progress we have achieved," said Nancy Snyder, a spokeswoman for New Jersey Transit. She noted that the railroad has acquired spectrum rights, equipped four "prototype vehicles" for testing and installed five antennas in a demonstration area, among other actions.

Beth DeFalco, a spokeswoman for Metro North and the Long Island railroads, said the railroads have done extensive work on PTC and hope to see benefits from the technology as soon as next year.

The NTSB has urged railroads to install positive train control or earlier train control technologies for more than four decades. The board says that over that time it has investigated at least 145 PTC-preventable accidents in which about 300 people were killed and 6,700 injured.

More recently, the board has said PTC could have prevented the head-on collision of two BNSF trains in June near Panhandle, Texas. Three railroad employees were killed in the crash. The technology also could have prevented the derailment of a speeding Amtrak train in Philadelphia last year. Eight people were killed and over 200 injured in the crash.

Commuter railroads have spent $950 million on PTC so far, but the total cost is estimated to be at least $3.48 billion, said Richard A. White, acting president of the American Public Transportation Association. The White House requested Congress provide $1.25 billion in the coming 2017 federal budget year to help commuter railroads with PTC; House and Senate spending bills allocate only $199 million.

"Despite this funding dilemma, the industry is moving forward with this top safety priority," White said in a statement.