Duke Energy Embroiled in Lawsuit Over Safety of Well Water

"The state health director's job is to protect public health," testified Ken Rudo, the state's toxicologist. "And in this specific instance, the opposite occurred." 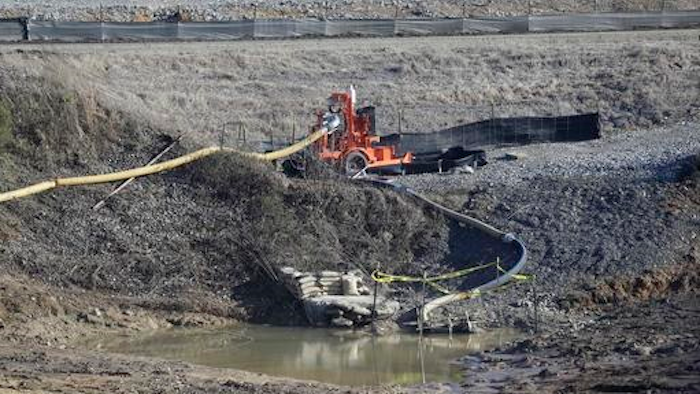 In this Jan. 14, 2016 file photo, a drainage pipe that was the original culprit of the coal ash spill is seen at the Dan River Steam Station in Eden, N.C. North Carolina's top public health official acted unethically and possibly illegally by telling residents living near Duke Energy coal ash pits that their well water is safe to drink when it's contaminated with a chemical known to cause cancer, a state toxicologist said in sworn testimony.
AP Photo/Gerry Broome, File

WASHINGTON (AP) — North Carolina's top public health official acted unethically and possibly illegally by telling residents living near Duke Energy coal ash pits that their well water is safe to drink when it's contaminated with a chemical known to cause cancer, a state toxicologist said in sworn testimony.

The Associated Press obtained a copy of the 220-page deposition given last month by toxicologist Ken Rudo as part of a lawsuit filed against Duke by a coalition of environmental groups. The nation's largest electricity company has asked a federal judge to seal the record, claiming its public disclosure would potentially prejudice jurors.

Rudo's boss, state public health director Dr. Randall Williams, in March reversed earlier warnings that had told hundreds of affected residents not to drink their water. The water is contaminated with cancer-causing hexavalent chromium at levels many times higher than Rudo had determined is safe.

"The state health director's job is to protect public health," testified Rudo, who has been the state's toxicologist for nearly 30 years. "And in this specific instance, the opposite occurred. He knowingly told people that their water was safe when we knew it wasn't."

Rudo also described being summoned for a highly unusual 2015 meeting at the office of Gov. Pat McCrory, a Republican who worked for Duke Energy for nearly three decades prior to his election. McCrory was away and listened in on the phone as his communications director, Josh Ellis, asked Rudo why it was necessary to warn the residents.

"Their concern was initially telling people not to drink the water," Rudo testified. "They felt that was a strong thing to do."

Rudo said the water warnings were required under state law once testing had shown the wells to be contaminated at what he had determined were unsafe levels of a cancer-causing chemical.

Kendra Gerlach, communications director for the state Department of Health and Human 7 Services, said she was also in the meeting in Ellis' office and said McCrory did not "participate."

Asked if she was accusing Rudo of lying under oath about McCrory being on the phone during the meeting, Gerlach responded, "Absolutely not."

Later, McCrory's office issued a statement quoting chief of staff Thomas Stith that accused Rudo of lying about whether McCrory took part in the meeting. Stith was not in Ellis' office during the exchange.

Rudo told the AP late Tuesday he stood by his sworn testimony, which he said was supported by emails and his notes.

"I was speaking under oath, they are not," said Rudo.

McCrory and his close ties to Duke Energy have been under scrutiny since a massive 2014 spill from one of the company's coal ash dumps coated 70 miles of the Dan River in gray sludge. McCrory is running for re-election in November.

Before the spill, McCrory's administration had proposed settling environmental violations at Duke's power plants for a total of $99,000 in fines. Afterward, Duke was forced by federal prosecutors to plead guilty to nine violations of the Clean Water Act at five plants, agreeing to pay $102 million.

Rudo testified his office was pressured by administration officials to add misleading and confusing language to the warning letters to be sent to residents. State officials finally issued letters without Rudo's signature to the owners of 330 water wells near Duke coal-burning plants, some of which showed hexavalent chromium levels far higher than the state's warning level — a one-in-a-million risk for a person to develop cancer.

Concerned that the letters played down the public health risk, Rudo said he had refused to sign them, and later made hundreds of phone calls to personally tell affected residents not to drink their water.

Hexavalent chromium can cause lung cancer when inhaled, and the Environmental Protection Agency says it's likely carcinogenic when ingested. In his deposition, Rudo said the chemical would cause an increased lifetime risk of causing tumors in those who drink it, especially pregnant women and children.

That and other toxic chemicals such as lead and arsenic are contained in coal ash, the byproduct generated after coal is burned to generate electricity. Duke denies its massive coal ash dumps are the source of the contamination, though it agreed to voluntarily provide bottled water to the affected households ringing its power plants.

Williams, an obstetrician and gynecologist who had worked in private practice, was appointed as state health director in July 2015, after the initial warning letters were issued.

Rudo testified that his new boss questioned whether the one-in-a-million risk standard laid out in state law was too strict when applied to the well water near Duke's coal ash pits. In countermanding the earlier decision, Williams adopted Duke's view that the standard was too cautious.

Rudo holds a doctorate in environmental toxicology, the study of the harmful effects of various chemicals on the human body. Williams signed the letters reversing the decision himself, after another public health official in Rudo's department refused on ethical grounds, according to the deposition.

Duke Energy argued in court papers earlier this month that Rudo's deposition should be kept private because the company's lawyers had limited opportunities to question him during the July 11 deposition.

"We have hours' worth of questions in response to the testimony provided by Dr. Rudo," said Paige Sheehan, a spokeswoman for the company. "His deposition is only about half completed and lawyers are just beginning to challenge Dr. Rudo's motives, his claims and his credibility."