Crash Deaths Worse in U.S. Than Other Affluent Countries 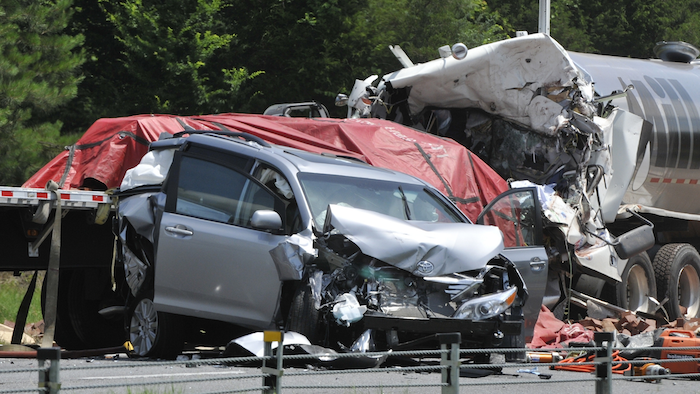 This AP File file photo shows a minivan and two semitrailers in an early morning fatal wreck on I-85 South near Shorter, Alabama. According to the CDC, traffic deaths are down most everywhere, but fatalities on the road are still a bigger problem in the United States than in other affluent countries.
Lloyd Gallman/The Montgomery Advertiser via AP

NEW YORK (AP) — Traffic deaths are down, but a new report shows fatalities on the road are still a bigger problem in the United States than in other affluent countries. The U.S. had by far the highest fatality rate for car crashes of the nearly 20 countries studied.

The U.S. rate in 2013 was more than twice as high as in most of the other countries. And traffic deaths haven't been dropping as fast in the U.S. The rate has fallen by nearly a third since 2000. But every other country had a steeper decline. The statistics probably reflect that Americans tend to drive more miles and for longer periods, said Dr. Guohua Li, of Columbia University's Center for Injury Epidemiology and Prevention.

"The more you're on the road, the more you're exposed to the potential for a crash," agreed Erin Sauber-Schatz, lead author of the Centers for Disease Control and Prevention report. The CDC released the report Wednesday. U.S. drivers also more often speed, drive drunk and take other risks, Li said in an email.

Some developing countries, not included in the report, have higher traffic death rates than the United States, but there's not enough good data to do a global comparison, CDC officials said.

Until last year, U.S. traffic deaths had been falling — often attributed to road and car safety improvements, child car seats, and efforts to increase seat belt use and discourage drunk driving. But crash deaths have been declining more dramatically in other countries that have even stricter guidelines and road safety measures, CDC officials said.

The U.S. toll went up last year to 35,200, as drivers racked up more miles behind the wheel as a result of an improved economy and lower gas prices.

The report compared rates from the U.S., Australia, Canada, Israel, Japan, New Zealand and more than a dozen European countries. The tally included drivers and passengers as well as pedestrians and bicyclists killed on the road.

The researchers tried to account for the greater mileage in the U.S. by calculating traffic deaths per miles traveled. By that measure, the U.S. was still among the deadliest countries, but Japan, Belgium and Slovenia were higher.