Detractors highlight the environmental dangers of bringing millions of tons of coal through the area while supporters tout the economic benefits. 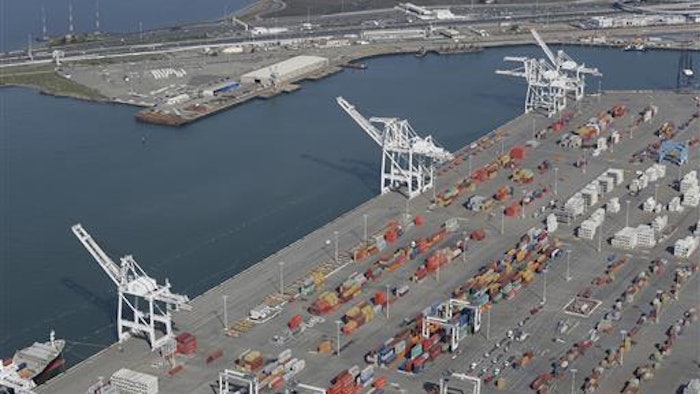 In this Feb. 5, 2016, file photo, the former Oakland Army Base pier at left and the Port of Oakland at lower right in Oakland, Calif. The promise of good, blue-collar jobs in a depressed area is running headlong into environmental sensitivities as officials in Northern California consider a plan to build a marine terminal that would serve as a gateway for Utah-mined coal heading to Asia. The terminal is in West Oakland, a historically black neighborhood that's among the poorest and most polluted in the region.
AP Photo/Eric Risberg, File

OAKLAND, Calif. (AP) — The promise of good, blue-collar jobs in a depressed area is running headlong into environmental sensitivities as officials in Northern California consider a plan to build a marine terminal that would serve as a gateway for Utah-mined coal heading to Asia.

The terminal is in West Oakland, a historically black neighborhood that's among the poorest and most polluted in the region. Detractors highlight the environmental dangers of bringing millions of tons of coal through the area while supporters tout the economic benefits.

On Monday, the eight-member Oakland City Council is scheduled to vote on whether to ban the transporting of coal because it would present a public health or safety hazard. A yes vote could scuttle the project.

Jerry Bridges, chief executive of the potential marine terminal operator, says jobs are the most significant issue and any environmental impact will be mitigated by transporting coal in covered rail cars that are unloaded underground.

"The only jobs that are here are jobs around Uber and Google and jobs that people who look like me generally don't get," said Bridges, who is black. His company, Terminal Logistics Solutions, has an option to operate the Oakland Bulk and Oversized Terminal.

Yet, this is the Oakland that is across the bay from San Francisco, down the way from Berkeley and in a state renowned for its commitment to environmentalism and clean energy. In this region, no amount of coal or its dust is safe.

"Putting the largest coal export depot on the West Coast in the middle of a disenfranchised community that already suffers from environmental pollution is devastating on so many levels," said state Sen. Loni Hancock, D-Berkeley, who has introduced bills to slow or derail the project. "It undercuts everything that California has said it's about for the last decade."

Gov. Jerry Brown last year signed legislation requiring two massive public pension funds to sell off stocks from companies that get more than half their revenues from mining coal.

But Brown, a former Oakland mayor and friend of Phil Tagami, the project's master developer, has been silent. A spokeswoman for Brown declined to comment.

In Oakland, both sides have been vocal. A City Council hearing in September drew hundreds of people and lasted six hours.

"And my question is: Don't somebody care? I'm not an environmentalist, I don't know very much about none of that stuff, OK?" he said. "But I support this project because I believe that some jobs could come in."

On the other side was Derrick Muhammad of the International Longshore and Warehouse Union, which opposes the shipment of coal.

"We welcome the terminal. We're just opposed to the coal," he said. "We can't sell our soul for a job. All money ain't good money."

The proposed site is the old Oakland Army Base, which closed in 1999, putting 7,000 people out of work. In 2012, city leaders approved plans for a shipping and warehousing base on more than 350 acres that would bring thousands of construction and shipping jobs, they said.

Proponents estimate an annual payroll of $76 million, with union jobs for mechanics, engineers, control room operators and such. Pay could range from $41,000 to over $100,000.

That is particularly alluring for the city's black population. African-Americans make up a quarter of Oakland's 410,000 residents, but half of West Oakland's, a district of 24,000 hemmed in by freeways and diesel-spewing trucks that travel to the port.

According to a 2015 Alameda County public health report, an African-American child born in West Oakland is four times less likely to read at grade level and five times more likely to be unemployed as an adult than a white child born in the affluent Oakland Hills. The asthma hospitalization rate among West Oakland children is twice the county average, according to the report.

So residents initially were thrilled with the idea of a transport hub that would cut down on truck traffic and boost rail and port operations. The project included a $250 million marine terminal capable of handling 9.5 million metric tons of bulk goods annually.

But in 2015, news reports surfaced that the marine terminal would export coal.

Oakland officials said coal had never been mentioned as a possibility. They cited Tagami's 2013 statement saying his company had "no interest or involvement in the pursuit of coal-related operations at the former Oakland Army Base."

Tagami said his statement was accurate at the time, but business plans changed. He also said Oakland leaders were notified.

That's not how others see it.

"The developer at the time said we would not have coal, so absolutely on the going-forward basis, it would make sense for that to be explicitly restricted," Oakland City Councilmember Rebecca Kaplan said.

City staff recommended Friday that the council prohibit the transportation and handling of coal, citing an independent study. The city-commissioned study found sufficient evidence that coal would harm residents.

Like the Sierra Club, the study's authors expressed skepticism that coal train covers are able to contain runaway dust. The Sierra Club estimates that more than 68,000 pounds of coal dust could escape each year.

West Oakland resident Jessie Poggi, a teacher, said she and her husband will likely move if the terminal is allowed to ship coal. The hum of freeway traffic is audible from her kitchen.

"I feel that Oakland really sells itself short as a city. There's so much promise and talent here, and I would love to see Oakland think more forward, toward renewable energy," she said. "This is a step in the wrong direction."