Roberts also criticized President Donald Trump, saying, "Coal is not back. Nobody saved the coal industry." 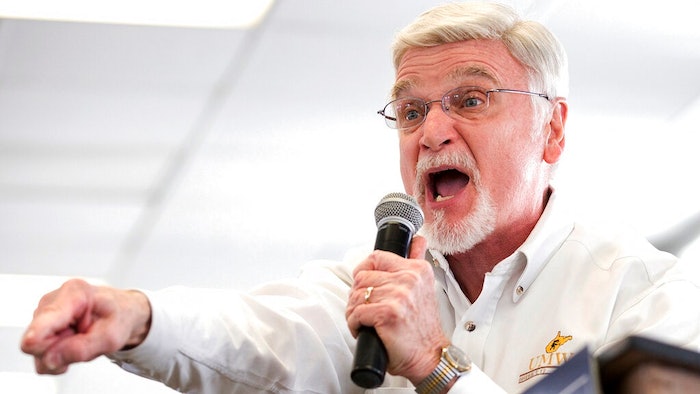 In this March 11, 2018, file photo, Cecil Roberts, president of United Mine Workers of America, speaks at the Greene County Fairgrounds in Waynesburg, Pa. Roberts says plans by Democratic presidential candidates to address climate change must account for thousands of coal workers whose jobs are at risk because of mine closures and competition from cheaper natural gas.
Antonella Crescimbeni/Pittsburgh Post-Gazette via AP

WASHINGTON (AP) — Democratic presidential candidates seeking to address climate change must account for thousands of coal workers whose jobs are at risk because of mine closures and competition from cheaper natural gas, the head of the largest coal miners' union said Wednesday.

Cecil Roberts, president of the United Mine Workers of America, said the Green New Deal and other climate plans threaten union members' jobs and their families' standard of living.

"I don't think a good starting point for Democrats is eliminating union jobs," Roberts said in a speech to the National Press Club.

If they want to win elections, "Democrats need a lot more union members, as opposed to fewer," Roberts said.

Roberts also criticized President Donald Trump, saying that despite Trump's frequent boasts, "Coal is not back. Nobody saved the coal industry."

Dozens of coal plants have gone bankrupt in recent years as abundant natural gas has become a cheaper alternative to coal for many power plants. Renewable energy sources such as solar and wind power also are emerging as serious threats to coal, which once powered the bulk of the nation's electricity but now supplies about a quarter of U.S. electricity.

Democrats have released a flurry of climate plans ahead of a CNN town hall Wednesday night on global warming. Most rank-and-file Democrats see climate change as an urgent crisis, and candidates are jostling to promote clean energy and move the country away from fossil fuels such as oil and coal.

While he hasn't seen them all, Roberts said, climate plans advanced by Democratic presidential candidates are potentially "extremely harmful" to coal workers.

"It's getting to a ridiculous level here about who's going to shut down more coal mines" in order to fight climate change, he said.

Still, Roberts emphasized that the mine workers' union has never denied the existence of climate change or that humans have contributed to it.

"It's real ... and it needs to be dealt with," he said. The union supported a 2010 climate bill pushed by then-Reps. Henry Waxman and Ed Markey, Roberts said, noting that among other provisions, the bill would have advanced spending on technologies to capture carbon dioxide emitted by coal-fired power plants. The bill passed the House but was not taken up in the Democratic-controlled Senate.

If the 2010 bill had been signed into law, "we would have been way down the road" on clean-coal technologies, Roberts said, calling the bill's defeat a missed opportunity.

Roberts also targeted Republicans, saying Senate Majority Leader Mitch McConnell has blocked a bill that would shore up miners' pensions and restore funding to a program that helps miners and retirees suffering from black lung disease.

The mine workers' union has been "the biggest pain" in McConnell's side for years, Roberts said, but he will happily - and publicly - thank the Kentucky Republican if he delivers a legislative fix on pensions and the black lung fund.

Roberts also urged Trump to weigh in on his favorite social media platform - Twitter - to spur action to help miners.

"I'm asking the president to consider tweeting for coal miners," he said.

White House spokesman Judd Deere said Trump has ended the so-called "war on coal," adding that the administration's rollback of "harmful and unlawful" rules imposed by the Obama administration, including the Clean Power Plan, have encouraged energy independence and helped to ensure that "coal miners are winning."