Analysts say the final bill will likely be much higher, when including the impact of lower sales. VW is only reporting costs that it knows about now. 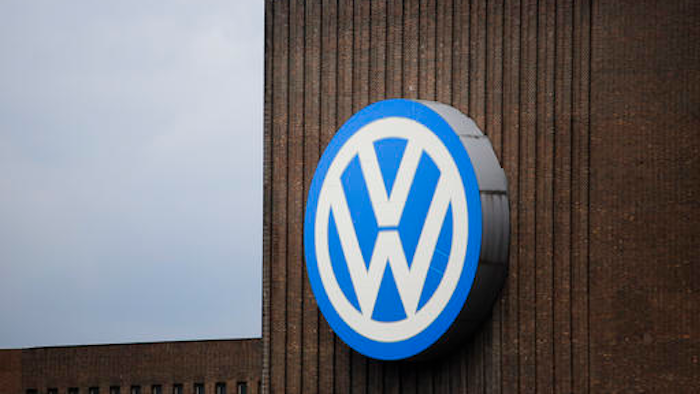 A security guard stands on the roof of the Volkswagen old power plant and monitors the area during the company's annual press conference in Wolfsburg, Germany, Thursday, April 28, 2016.
AP Photo/Markus Schreiber

FRANKFURT, Germany (AP) — Volkswagen said Thursday it had set aside 7.8 billion euros ($8.8 billion) to buy back or fix diesel-powered cars that had been rigged to cheat in emissions tests.

The sum is part of 16.2 billion euros the company deducted from last year's earnings to cover the costs of the emissions scandal, in which its cars were fitted with software that enabled them to pass tests but then turned emissions controls off during everyday driving.

The German automaker further broke down the set-aside for 2015 by saying it included 7.0 billion euros for fines and legal costs worldwide.

Analysts say the final bill will likely be much higher, when including the impact of lower sales. Volkswagen says it is reporting costs that it knows about at the present time.

Volkswagen is currently working out a settlement with U.S. authorities in federal court in San Francisco, and has said that would include an offer to buy back as many as 500,000 of the just under 600,000 defective vehicles.

CEO Matthias Mueller said Thursday that recalling and fixing the cars that were rigged to cheat on the tests "will remain our most important task until the very last vehicle has been put in order."

He used the company's annual news conference to also sketch out a wide-ranging transformation of the company that would see it focus more on electric vehicles and services like car-sharing as it seeks to get past its scandal over cheating on diesel emissions tests.

He stressed that the company's car business remains "fundamentally sound" but detailed a promised plan to emphasize digital services and zero-emissions vehicles. The company would soon form a legally independent company to promote business in mobility services, which can include things like ride-sharing apps and car-sharing, he said.

Mueller said that the company would "make electric cars one of Volkswagen's new hallmarks" with 20 new models by 2020.

Volkswagen had previously emphasized diesel technology, which has suffered a blow since it became clear Volkswagen engines could not meet U.S. emissions standards without cheating. The company has admitted using engine software that disabled emissions controls when vehicles were not being tested. That improved performance and mileage but meant the vehicles spewed far more than the legal limit of pollutants.

Mueller apologized again for the scandal, telling the company's annual news conference in Wolfsburg, Germany, that "we disappointed many people who trusted Volkswagen."

The company said its robust cash reserves of 24.5 billion euros at year end left it in a strong financial position. Chief Financial Officer Frank Witter said that the company would not propose any capital increase to shareholders at its annual meeting in June.