The Future of Navy Training is Virtual Reality 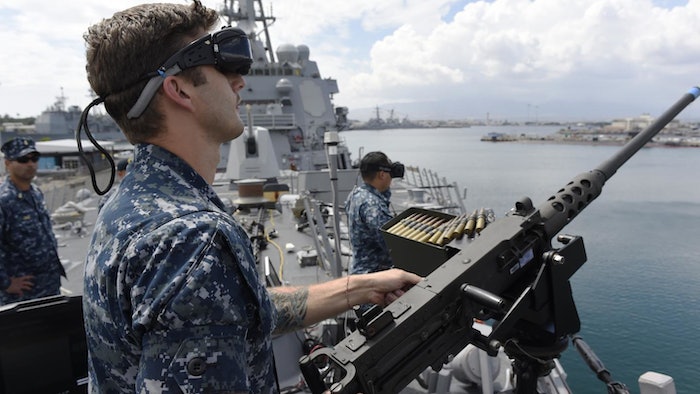 Suddenly, a swarm of small fast-attack boats buzzed toward the destroyer. Within moments, a machine gunner shot withering streams of 50-caliber bullets at the approaching enemies, forcing their retreat.

This wasn’t a real attack on an American ship, but a tribute to the realism of the Fleet Integrated Synthetic Training/Testing Facility (FIST2FAC)—which develops, tests and demonstrates simulator training technology blending live-action exercises with virtual assets and adversaries.

“This is the future of training for the Navy,” said Dr. Terry Allard, head of the Warfighter Performance Department at the Office of Naval Research (ONR). “With simulation, you can explore endless possibilities without the expense and logistical challenges of putting hundreds of ships at sea and aircraft in the sky.”

The system can replicate situations involving aircraft carriers, helicopters (in this case, a squadron from Marine Corps Base Hawaii), lethal and nonlethal weapons, and more.

“FIST2FAC was created in response to an urgent need for a more portable way for ships to train in any given operating area,” said Glenn White, ONR’s integration and transition manager for the project. “It allows Sailors to ‘train like they fight’ by presenting realistic forces in a visual, tactical and operational environment.”

During the demonstration on Ford Island, Sailors manning a virtual ship were pitted against several fast-attack craft in waters crowded with merchant traffic. They quickly determined the boats to be hostile and engaged them with machine-gun fire from both the ship and a virtual helicopter.

FIST2FAC, which was developed with support from the Naval Undersea Warfare Center Keyport Division, has demonstrated simulator technology since 2010. The latest event showcased improved capabilities and new enhancements to FIST2FAC training simulators:

White said the technology demonstrated at FIST2FAC is a valuable tool for the Navy for two main reasons—savings and security.

The software is reusable and can be modified for different environments. By comparison, it costs about $250,000 just to get an aircraft carrier out for live training—and approximately $6 million to fuel a strike group for a week. A live event lasting six to 10 hours may cost a million dollars.

The ability to recreate so many combat scenarios anywhere also is useful in training for any challenge a ship might face worldwide—from vessel maintenance to landing a fighter jet to navigating hostile waters.

Currently, FIST2FAC is shore based, but one day White wants to make the capabilities developed there available to ships at sea. “The ultimate goal is to wrap a destroyer in an augmented world where everyone throughout the ship can see virtual vessels, aircraft and adversaries and train to respond appropriately.”