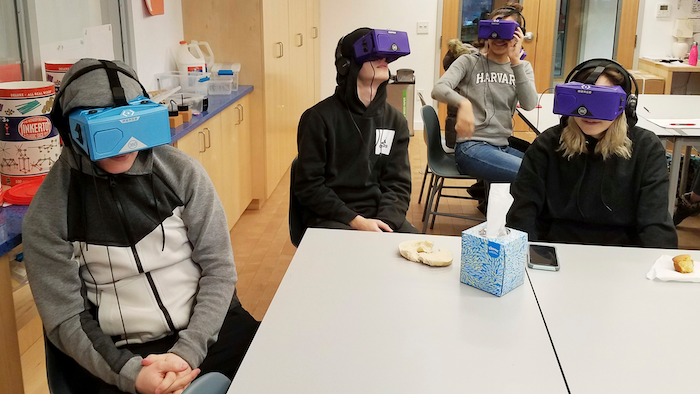 In this Feb. 7, 2018 photo, students at the Berkeley Carroll School in the Brooklyn borough of New York use virtual reality headsets in their classroom. Experts say the technology is still relatively rare in schools, but they expect that to change as costs come down and content improves. Seated at the table from left are Daniel Cornicello, 17, Charlie Hertz, 17, and Taylor Engler, 16. At the table in the back of the room is Angela Aguero, 17.
AP Photo/Deepti Hajela

NEW YORK (AP) — On a February afternoon in a Brooklyn classroom, 16-year-old Taylor Engler came face to face with a cow. But it was all in her head.

A virtual reality headset had transported the Berkeley Carroll School junior and eight classmates to an upstate New York farm 250 miles (402 kilometers) away. For students, the technology means field trips are no longer limited by the length of a bus ride.

"I was not expecting it to be right in my face!" Taylor said after peeling off the purple headset and finding herself back in the confines of her city classroom.

On any given day, students nationwide are deep-sea diving, observing medical operations, even swimming through the human circulatory system using gadgets that are becoming increasingly accessible in both cost and content.

At the least, teachers say, it's another way to engage the iPhone generation of students. At best, it can enhance their understanding and improve their grades.

"It instantly grabs the students," said Colin Jones, who teaches science in the Plainview-Old Bethpage Central School District. He has used a system called zSpace to dissect cells and has walked goggled students through the boreal forest with a Google app called Expeditions.

"It's something that can be done in a period or two," he said, "when it could take even a week sometimes when you're doing a lab."

In Brooklyn, Engler and classmates virtually walked through barns and fields in Watkins Glen, stretching arms toward videotaped pigs and cows only they saw. It was an "outing" that otherwise would not have happened, adviser Lily Adler said, given the constraints of time and staffing.

"It's different than watching video because you can have more than one perspective; you can actually move," Taylor said during the lesson by animal rights group Farm Sanctuary.

Not only move, but also feel, said Richard Lamb, who at the University at Buffalo Neurocognition Science Lab studies how the brain processes information. In the lab, the physical effects of virtual reality become clear as subjects standing on solid ground teeter on stories-high virtual scaffolding or experience motion sickness without moving.

"Some of the research we're doing has actually shown that what you experience in virtual reality has very similar, if not the same, physiological responses that you would get if you were doing the actual activity," Lamb said. "Heart rate, cognition, breathing, everything."

The effect on learning, he said, is to improve interest, understanding and recall.

It's unknown how many classrooms have or will adopt the technology, but experts say it's still relatively rare. While individual headsets that require a user's phone can cost as little as $20 or $30, systems and software for classes run into the thousands of dollars. Early complaints about a lack of good software are fading as more companies enter the market, but the rules for use haven't necessarily caught up to the technology.

Even so, experts say, the sciences are an area where virtual reality, especially enhanced to let users manipulate their surroundings, holds particular promise for classrooms.

"The biggest hindrance, I think, is going to be the quality of that experience, how closely it mimics the physical world," said David Evans, executive director of the National Science Teachers Association.

But, he said, "the ability to do dangerous things, the ability to run many, many more cases in a simulation space as opposed to the real physical space represents a huge learning opportunity."

"Too often in schools, when we do things with laboratories, it's ... you mix this together, you mix that together and you get this outcome. And if you don't get that outcome, you did something wrong, but we don't have enough resources for you to redo it," he said. In virtual reality, "all I do is hit reset on the computer. I don't have to actually use chemicals."

Both Lamb and Evans stressed using the technology to enrich — not replace — real-world experiences, where any number of subtle factors can affect an outcome.

"We have to remain anchored in the actual world," Evans cautioned, "because that's the one that we really need to explain."

The Future of Navy Training