The Congressional Budget Office has estimated that the cost of building and operating 355 ships would average $102 billion annually through 2047.

PROVIDENCE, R.I. (AP) — The U.S. Navy's senior officer wants a larger and better fleet sooner to compete with other countries, but says the cost is yet to be determined.

Adm. John Richardson, the chief of naval operations, released a paper Wednesday that conforms with President Donald Trump's call for a 350-ship Navy and the service's own estimate that it needs 355 ships.

But Richardson says growing the fleet is insufficient, the Navy needs a different fleet that can fight in new ways.

He wants ships and aircraft to be built faster, with innovative technology so they're more capable— or, an "exponential" growth in naval power. The pace that competitors are developing their navies, including China and Russia, demand it, Richardson said.

"My sense is that we're on the dawn of something very substantial in terms of naval warfare," he said during a press conference call, "... as substantial as the advent of nuclear propulsion."

Richardson declined to provide a cost estimate to The Associated Press. He said the plan and pace of shipbuilding isn't finalized, and past cost predicting models don't necessarily apply when production speeds up. Building aircraft carriers faster, for example, could save billions in labor, materials and other costs, he added.

The Congressional Budget Office has estimated that the cost of building and operating 355 ships would average $102 billion annually through 2047, which is more than one-third higher than the amount appropriated for fiscal year 2016 for today's 275-ship fleet.

Richardson said it'll cost "far less," than that prediction, though he understands that some may question the expense when there are cuts to federal spending in many other areas, including health care and education.

"My contribution to that debate is really to provide the most capable Navy that we think we can get to, and then we'll see where the priorities shake out," he said.

Loren Thompson, a military analyst at the Lexington Institute, said he thinks the Navy will likely have to live within its current budget, more or less, because there's not much evidence that Trump can convince Democrats in Congress to go along with removing budget caps. But, he said the Navy can still get some of the capabilities it wants if it takes advantage of technological innovations.

If the Navy can use a railgun or a laser to shoot down aircraft or an incoming missile, that would save millions over the cost of a missile, for example, Thompson said. Savings like that could be invested in making warships more flexible, so the Navy isn't locked into a particular warfighting approach that may not match a future threat, he added.

Richardson wants to keep some ships in the fleet past the time they're scheduled to retire and connect sensors, weapons, ships and aircraft in a more seamless way, to get to a more powerful fleet in the 2020s instead of the 2040s. To convince Congress to pay for it, Richardson said he's trying to articulate his vision and provide a clear picture that it can be done.

At the Center for Strategic and Budgetary Assessments, senior fellow Bryan Clark said Congress has recently shown a willingness to add Navy ships to the budget and he thinks they'll continue to do so to get to a larger fleet. Congress can't necessarily commit to a future vision because the budget is done year to year, not decades out, he added.

Clark, who worked for the previous chief of naval operations, said the most innovative part of the paper is the proposed interconnectivity of the future fleet, so ships over hundreds of miles can work together to achieve a mission and a single ship doesn't have to be capable of doing every mission on its own. It's a different way of thinking about a Navy, he said. 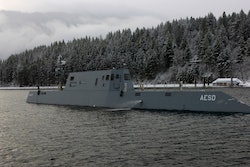 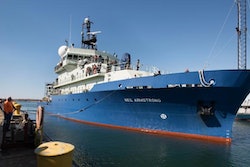 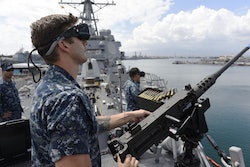 The Future of Navy Training