Initial Estimate of Keystone Leak Off by More Than 16,000 Gallons

TransCanada hasn't said what caused the leak, but has told customers the pipeline will remain closed until early next week. 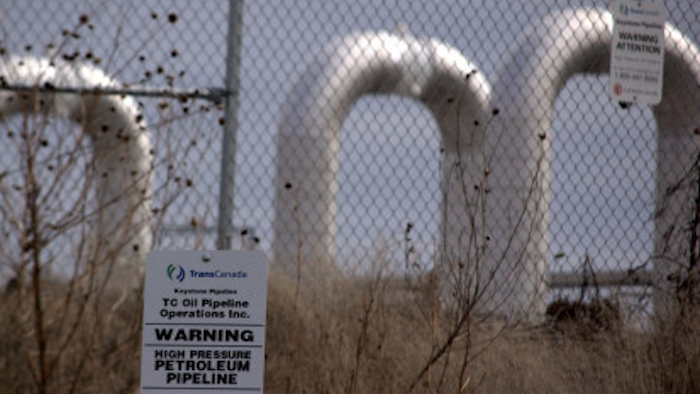 TransCanada has released estimates showing that about 16,800 gallons of oil leaked into a field in South Dakota as part of a spill that shut the Keystone pipeline down earlier this week. Initially, officials said less than 200 gallons were spilled.

The company says it reported the 400-barrel estimate Thursday to the National Response Center and the Pipeline and Hazardous Materials Administration. It says the estimate is based on the excavation of soil to expose more than 100 feet of pipe, and takes into account factors including oil observed in the soil and the potential area affected.

TransCanada hasn't yet said what caused the leak, which was reported Saturday. The company has told customers the pipeline will remain closed until early next week.

About 100 workers are at the site, said a TransCanada spokesman. He said specialists at the site affirm that the leak is being controlled and there is no significant environmental impact and no threat to public safety.

The pipeline runs from Alberta, Canada, to refineries in Illinois and Cushing, Oklahoma, passing through the eastern Dakotas, Nebraska, Kansas and Missouri. The Keystone pipeline can handle 550,000 barrels, or about 23 million gallons, daily.

It's part of a pipeline system that also would have included the Keystone XL pipeline had President Barack Obama not rejected that project last November.

Analysts say the shutdown will have a short-term impact in which less-heavy Canadian crude will be getting to the market, but the system is already oversupplied so consumers are unlikely to see an impact at the pump.