Keystone XL Co. Moves to Condemn Land in its Path

The company has 94 percent of the private property easements needed for the project, but some families are holding out.

At least one family plans to fight. Resident Jeffrey Jensen said he'll take the matter to court if necessary.

"I got nothing to lose. Wouldn't bother me in the least," he said. "They (TransCanada) actually want to give less than they did before on my first easement."

Jensen initially signed a five-year contract with the company for the easement. But the company's easement expired after President Barack Obama's administration denied Keystone permitting for the pipeline to pass the international border from Canada to the U.S. President Donald Trump's administration has since reversed that decision with an executive order .

The $8 billion, 1,184-mile (1,905-kilometer) pipeline would carry oil from Canada through Montana, and South Dakota to Steele City, Nebraska, where it would connect with the original Keystone pipeline that runs to Texas Gulf Coast refineries. The Keystone XL pipeline would provide a more direct and wider transfer of crude oil than the current Keystone line, company officials said.

The company has 94 percent of the private property easements needed for the project, according to TransCanada's latest quarterly report filed with the South Dakota Public Utilities Commission. The pipeline would cross over 300 private parcels in the state. The company has yet to secure easements on state land.

The project still faces several hurdles along with resistance from environmental groups and Native American tribes.

The South Dakota Supreme Court in June dismissed pipeline opponents' appeal of a judge's decision last year that upheld regulators' approval for the pipeline to cross the state. 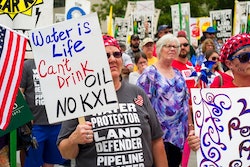 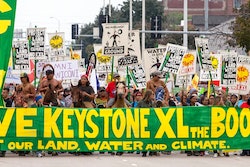 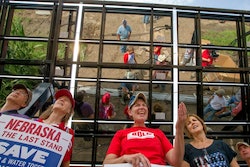