More companies could begin making an easy-to-use version of an opioid overdose antidote. 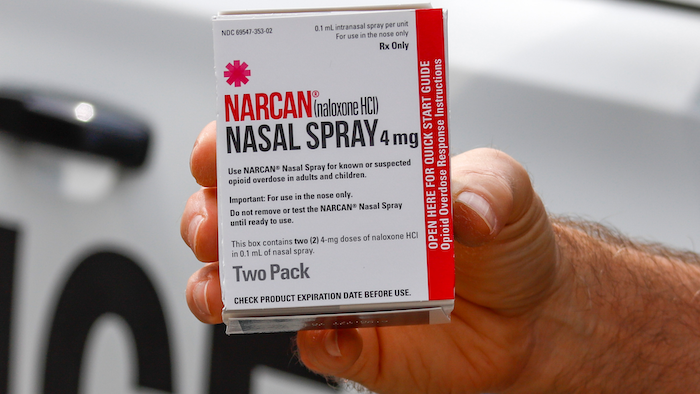 In this Thursday, Sept. 12, 2019 file photo, a police officer holds a box of Narcan, a drug used to treat opioid overdoses, that the department officers carry in their patrol vehicles in Jackson Township, Butler County, Pa. More companies could begin making the easy-to-use version of the medication under a deal announced Thursday, Jan. 2, 2020 by New York's attorney general.

Under the agreement, Emergent BioSolutions will no longer enforce a contract that had allowed it to be the only company to develop a nasal spray version of the drug nalmefene for use as an antidote in a nasal spray.

The attorney general's office said the new agreement came after it found that Adapt Pharma, which has since been bought by Rockville, Maryland-based Emergent, had the exclusive rights to sell the drug using Aptar Pharma's nasal spray technology. The drug is still in the pipeline and is not on the market, though.

“Given the tragic, devastating effects of the opioid crisis, and the urgent need for additional drugs for the emergency treatment of opioid overdoses, my office will do whatever possible to ensure that there are no unnecessary impediments to the development of additional life-saving opioid overdose reversal drugs,” Attorney General Letitia James said in a written statement.

The agreement with James's office does not affect Narcan, a spray version of the drug naloxone now sold by Emergent. That from is popular for police, firefighters and others to use to try to revive people who are overdosing. It is not subject to an exclusivity agreement on the spray technology.

Narcan retails for about $140 for two doses, but the company sells that amount to first responders for $75.

More than 400,000 deaths in the U.S. since 2000 have been linked to opioids, a class of drugs that includes heroin, fentanyl, and prescription painkillers such as Vicodin and OxyContin.

Companies would still need Food and Drug Administration approval before their products could be on the market.

There is at least one effort to introduce a generic version of a naloxone nasal spray. Purdue Pharma, the maker of OxyContin, announced a grant in 2018 for a nonprofit drug company to develop one.