The U.S. has canceled plans to impose new tariffs on $160 billion worth of Chinese imports. 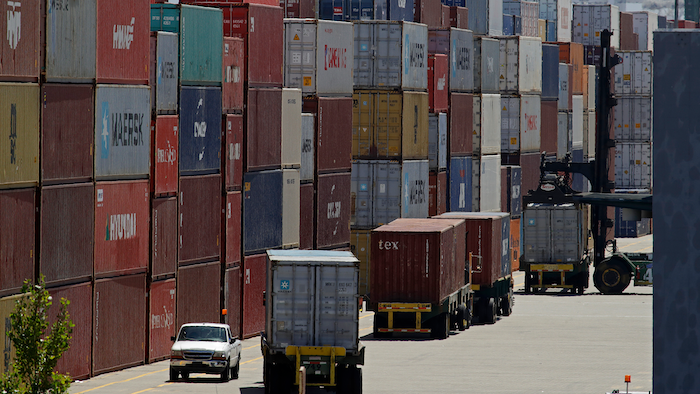 In this July 22, 2019, file stacked containers wait to be loaded on to trucks at the Port of Oakland in Oakland, Calif. China's government says trade negotiators are in “close communication” with Washington ahead of a weekend deadline for a U.S. tariff hike. But a Ministry of Commerce spokesman gave no indication of possible progress in trade talks or whether Washington might postpone the increase.
AP Photo/Ben Margot, File

WASHINGTON (AP) — President Donald Trump said Friday that the U.S. has canceled plans to impose new tariffs on $160 billion worth of Chinese imports Sunday as part of a modest interim agreement that de-escalates a 17-month trade war between the world's two biggest economies.

The United States is also reducing existing import taxes on about $112 billion in Chinese goods from 15% to 7.5%

In return, Trump said on Twitter, the Chinese have agreed to "massive'' purchases of American farm and manufactured products. He did not specify how big those purchases would be.

Chinese officials said at a briefing in Beijing that if Washington reduces the tariffs, China will lower its trade penalties on American goods and also scrap plans for new tariffs Sunday.

“China is ready to work with the U.S. side to do more to promote growth in trade,” said Liao Min, deputy finance minister.

Asked to confirm reports that Beijing had committed to buy $50 billion of American farm goods, Liao said details would be released later.

The ``Phase 1'' deal announced Friday leaves unresolved some of the thorniest issues. But Trump said work on a follow-up would begin ``immediately, rather than waiting until after the 2020 Election. This is an amazing deal for all. Thank you!''

Before Friday's announcement, Chinese Foreign Minister Wang Yi had complained at a government-organized forum in Beijing that Washington was unfairly attacking China.

“The U.S. side has successively imposed unjustified restrictions and crackdowns on China in economy and trade, science and technology and personnel exchanges,” Wang said. “As far as China is concerned, what we are pursuing is our justified rights of development.”

Financial markets rallied in Asia on hopes for reduced trade tension. But stocks were down in early trading on Wall Street.

Three Democratic senators, in a letter to the White House on Thursday, urged Trump to "stand firm'' in negotiations with China. Sens. Chuck Schumer of New York, Ron Wyden of Oregon and Sherrod Brown of Ohio called on the president to hold out for “commitments from the Chinese government to enact substantive, enforceable and permanent structural reform.''

The administration accuses China of cheating in its drive to develop advanced technologies as driverless cars and artificial intelligence.

The administration alleges, and independent analysts generally agree, that China steals technology, forces foreign companies to hand over trade secrets, unfairly subsidizes its own firms and throws up bureaucratic hurdles for foreign rivals.

Beijing rejects the accusations and contends that Washington is simply trying to suppress a rising competitor in international trade.

Despite the plans for an announcement, it's not a done deal, noted Jeffrey Halley of the foreign exchange company Oanda.

“After such an interminable wait and having being led to water before, I would like to see something official in writing officially. Further to that point, although the in-principle agreement may have been agreed, the legally binding text has yet to be drawn up," he said.

Since July 2018, the Trump administration has imposed import taxes on $360 billion in Chinese products. Beijing has retaliated by taxing $120 billion in U.S. exports, including soybeans and other farm products that are vital to many of Trump's supporters in rural America.

On Sunday, the U.S. was set to start taxing an additional $160 billion in Chinese imports, a move that would extend the sanctions to just about everything China ships to America.

Repeated rounds of negotiations had failed to achieve even a preliminary agreement. The prolonged uncertainty over Trump's trade policies has curtailed U.S. business investment and likely held back economic growth. Many corporations have slowed or suspended investment plans until they know when, how or even whether the trade standoff will end.

A far-reaching agreement on China's technology policies will likely prove difficult. It would require Beijing to scale back its drive to become a global powerhouse in industrial high technology, something it sees as a path to prosperity and international influence.

Efforts to acquire foreign technology are a theme that runs through Chinese law and government. Security researchers have asserted that Beijing operates a network of research institutes and business parks to turn stolen foreign technology into commercial products.

The Trump administration has been seeking a way to enforce any significant trade agreement with China, reflecting its contention that Beijing has violated past promises. One way to do is to retain some tariffs as leverage.