The Federal Reserve is prepared to keep its benchmark interest rate very low through at least next year and possibly longer. 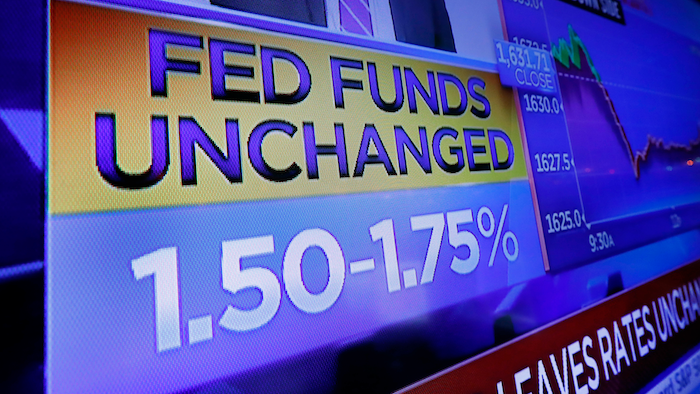 A television screen on the floor of the New York Stock Exchange shows the rate decision of the Federal Reserve, Wednesday, Dec. 11, 2019. The Federal Reserve is leaving its benchmark interest rate alone and signaling that it expects to keep low rates unchanged through next year.
AP Photo/Richard Drew

WASHINGTON (AP) — Chairman Jerome Powell made clear Wednesday that the Federal Reserve is prepared to keep its benchmark interest rate very low through at least next year — and possibly longer.

Fueling that expectation is the growing belief of Fed officials that inflation will remain tame even as the economy keeps growing modestly and the job market remains solid. The lowest unemployment rate in a half-century — 3.5% — won't necessarily fan high inflation as it might have in the past, Powell suggested at a news conference.

On Wednesday, the Fed left its key short-term rate in a low range of 1.5% to 1.75% after having reduced it three times this year. Powell had previously characterized those rate cuts as “insurance” that would offset the drags from the U.S.-China trade war and global slowdown. But on Wednesday, he boldly suggested that the Fed wouldn't likely reverse those cuts for the foreseeable future.

“Inflation is barely moving up, notwithstanding that unemployment is at 50 year lows and expected to remain there,” Powell said at his news conference. “We have learned that unemployment can remain at quite low levels for an extended period of time without unwanted upward pressure on inflation.”

In a further sign of its confidence, the Fed's latest policy statement dropped a phrase it had previously used that referred to “uncertainties” surrounding the economic outlook. This change suggested that the Fed is now less worried about economic risks from the trade fights or global slowdown.

With the Fed's key rate likely to stay where it is, consumers interested in buying a home or car should continue to enjoy low borrowing costs. Businesses will likely also enjoy lower interest rates. Savers, though, will struggle to earn a return above the inflation rate.

Powell signaled that persistently low inflation is allowing the Fed to pursue low interest rate, or “accommodative,” policies to sustain the 11-year economic expansion and try to create the conditions for more people to find jobs.

“Even though we are at 3½% unemployment, there is actually more slack out there in a sense,” Powell said. “And the risks of using accommodative monetary policy, our tool, to explore that, are relatively low.”

The chairman expressed optimism about the economy and satisfaction that the Fed's rate cuts this year may have helped prolong growth.

“Both the economy and monetary policy are in a good place,” he said.

Many analysts note, though, that the economy faces threats from the trade conflicts, a stumbling manufacturing sector and cutbacks in business investment. Some say the Fed may feel compelled to cut rates at least once next year.

Still, in updated forecasts the Fed issued Wednesday, no officials penciled in a rate cut in 2020. Instead, four Fed officials said they expected a rate increase next year. The remaining 13 officials projected no change to rates.

“If I were Powell, I would say I have things exactly where I want them,” said David Jones, an economist and author of five books on the Fed. “Despite all the people who criticized Powell for not easing sooner or not easing more, it looks like this mid-course correction of three rate cuts was almost perfect in keeping the economy growing on a sustained basis.”

For now, the chairman has managed to draw his colleagues on the Fed's policymaking committee fully into his corner. No Fed officials dissented from Wednesday's decision to keep rates unchanged — the first time in five meetings that a vote was unanimous.

Powell has suggested that this year's rate cuts have helped lower mortgage rates and spurred growth in home purchases. Auto sales have also remained healthy as more Americans have borrowed to buy cars.

Still, Powell's satisfaction with the Fed's policies comes after the central bank executed a U-turn this year. The Fed raised its benchmark short-term rate four times in 2018 after growth began the year at a healthy pace. But as the trade conflicts intensified, the stock market fell at year's end and inflation slowed rather than picked up as expected, the Fed reversed course and cut rates three times.

“Toward the end of 2018, there was still a sense that the economy was growing at around 3%, and it didn't,” he said. “I didn't expect to face the challenges, but I think we did face them, and I'm pleased that we moved to support the economy in the way that we did.

Fed policymakers have been weighing their options to stabilize short-term lending in money markets. In late September, overnight lending markets seized up, and banks and other financial institutions struggled to find short-term loans. This problem briefly lifted the Fed's benchmark rate out of its target range.

Powell said that the Fed's efforts to boost banks' cash reserves by purchasing Treasury bills and its own short-term lending have been effective.

“For the last couple of months, (short-term lending) markets have been functioning well,” he said.

In the longer run, Powell said that the Fed is considering “fairly straightforward, noncontroversial changes" to financial regulations to make it easier for large banks to provide short-term loans.