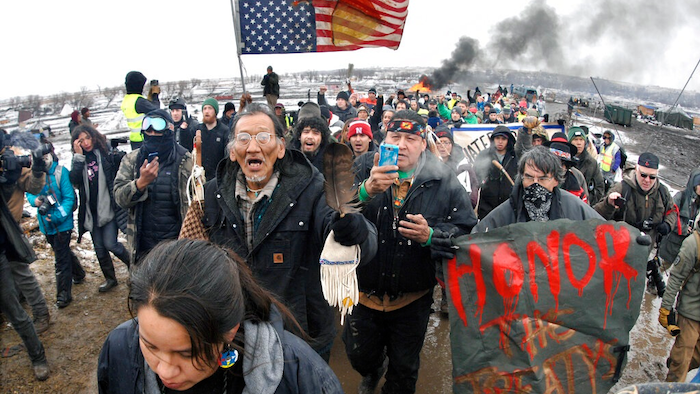 In this Feb. 22, 2017, file photo, a large crowd representing a majority of the remaining Dakota Access Pipeline protesters march out of the Oceti Sakowin camp before the deadline set for evacuation of the camp mandated by the U.S. Army Corps of Engineers near Cannon Ball, N.D. North Dakota's congressional delegation is urging two Trump administration officials to address the state's year-old demand for $38 million to cover the cost of policing large-scale and at times violent protests against the Dakota Access oil pipeline.
Mike McCleary/The Bismarck Tribune via AP, File

North Dakota's attorney general filed an administrative claim against the Army Corps of Engineers last year, accusing the agency of letting protesters illegally camp on federal land in North Dakota in 2016 and 2017. It also argued the Corps didn't maintain law and order when thousands gathered to protest the $3.8 billion pipeline built by Texas-based Energy Transfer Partners.

The pipeline was designed to move North Dakota oil through South Dakota and Iowa to a shipping point in Illinois.

The Corps inaction "required North Dakota to provide a sustained, large-scale public safety response to prevent deaths, and protect property and public safety, including that of the protesters," Attorney General Wayne Stenehjem wrote in the funding request at the time.

The state delegation is now asking Barr and Shanahan to recognize the state's public safety response during the prolonged and sometimes violent protests.

The delegates' request came on the same day that a federal appeals court ordered the dismissal of a lawsuit filed by environmental and Native American groups who sought to block construction of the Keystone XL oil pipeline. Opponents of the $8 billion pipeline from Canada to the U.S. have threatened similar protests to those against the Dakota Access pipeline. 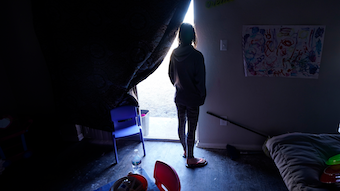