The company must provide 20,000 trees to county soil conservation districts along the pipeline's 359-mile route across North Dakota. 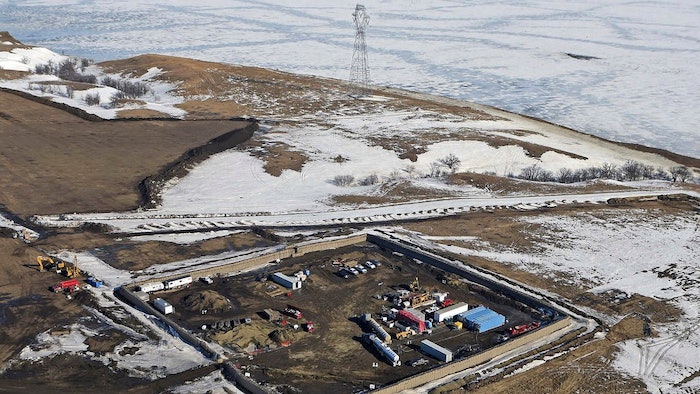 This Feb. 13, 2017, aerial file photo shows a site where the final phase of the Dakota Access Pipeline near the Missouri River took place with boring equipment routing the pipeline underground and across Lake Oahe to connect with the existing pipeline in Emmons County in Cannon Ball, N.D. The developer of the Dakota Access oil pipeline missed a year-end deadline to plant thousands of trees along the pipeline corridor in North Dakota, but the company said it was still complying with a settlement of allegations it violated state rules during construction.
Tom Stromme/The Bismarck Tribune via AP, File

BISMARCK, N.D. (AP) — The developer of the Dakota Access oil pipeline missed a year-end deadline to plant thousands of trees along the pipeline corridor in North Dakota, but the company said it was still complying with a settlement of allegations it violated state rules during construction.

Texas-based Energy Transfer Partners, which built the $3.8 billion pipeline that's now moving North Dakota oil to Illinois, is falling back on a provision of the September 2017 agreement that provides more time should the company run into problems. The company must provide 20,000 trees to county soil conservation districts along the pipeline's 359-mile (578-kilometer) route across North Dakota.

The deal with North Dakota's Public Service Commission settled allegations that ETP removed too many trees in some areas and that it improperly handled a pipeline route change after discovering Native American artifacts. The artifacts were not disturbed.

The agreement required the company to replant trees and shrubs at a higher ratio in the disputed areas, along with an additional 20,000 trees along the entire route. ETP filed documents in October detailing efforts by a contractor to plant 141,000 trees and shrubs, but the PSC asked the company a month later to provide more documentation that it had complied with all settlement terms.

Company attorney Lawrence Bender recently submitted a report from contractor KC Harvey Environmental further detailing the replanting efforts in the disputed areas. He noted that in some areas where landowners refused trees, the trees were reallocated to other landowners "who had the space and desire to accommodate more plantings."

Only about 8,800 of the required 20,000 additional trees were planted in 2018 through county soil conservation districts due to several factors, including equipment and staffing issues, difficulties finding willing landowners and poor planting conditions, according to Perennial Environmental Services, which ETP hired to handle the work.

A soil conservation district in one of the seven counties refused to participate at all because it didn't feel any of the 15 tree species identified in the settlement agreement were suitable for the county.

The agreement allows for the work to continue into 2019 if there are problems with the tree supply "or other market conditions." Soil conservation districts in six counties have committed to planting about 16,800 more trees in 2019, for a total of more than 25,500, according to Perennial Environmental Services.

PSC officials weren't available Monday for comment on whether the state thinks ETP is justified in prolonging the plantings into the new year.

Under the agreement, ETP also was directed to develop an industry handbook on properly handling pipeline route adjustments and to conduct training. In return, the PSC didn't require the company to admit wrongdoing and scrapped a proposed $15,000 penalty. The agency has the power to levy up to $200,000 in fines.