The large fire burned for days and caused chemicals to flow into a nearby waterway. 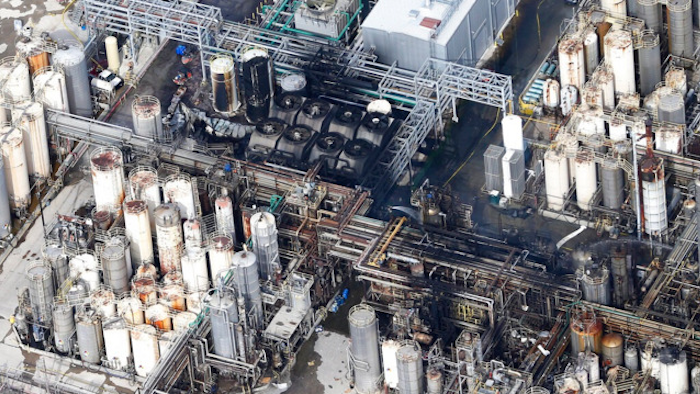 This aerial photo shows the KMCO chemical plant as firefighters spray water on a fire on Tuesday, April 2, 2019, in Crosby, Texas. Pilar Davis, a product manager with KMCO, says the fire initially ignited with isobutylene and was fueled by ethanol and ethyl acrylate. All three are chemicals and solvents used to make fuel additives at the plant.
Elizabeth Conley/Houston Chronicle via AP

HOUSTON (AP) — Water pollution charges were filed Monday against a company that owns a Houston-area petrochemical storage facility where a large fire that burned for days in March caused chemicals to flow into a nearby waterway.

Prosecutors allege following the March 17 fire, a dam at the facility broke, sending large quantities of toxic chemicals, including xylene and benzene, into nearby Tucker Bayou, which flows into Galveston Bay and the Gulf of Mexico, said Tom Berg, first assistant district attorney for Harris County.

"We support the petrochemical industry. It's the life blood of the Houston area, and by and large, our corporate, industrial friends are responsible," Berg said. "They take great care in safety and environmental concerns. But when they're failures, those folks need to be held accountable and this company in particular has had a history of environmental violations. So we're not inclined to look the other way."

Berg said the investigation is ongoing and additional charges could be filed.

Michael Goldberg, an attorney for ITC, said he and his client had not seen the charges. Nevertheless, "there is no question that there was a large fire and an enormous effort to extinguish it which resulted in a discharge into Tucker Bayou," he said in a statement.

The Deer Park facility, located southeast of Houston, caught fire March 17 and burned until March 20, sending waves of thick, black smoke thousands of feet into the air and forcing the closure of roads and schools. The water pollution took place through March 21, Berg said.

Air monitors on March 21 detected elevated levels of benzene in the air, prompting public officials to order people living in the area to remain indoors for several hours.

The next day, a dike failed adjacent to the tank farm, allowing flammable chemicals to seep into nearby bayous and then into the Houston Ship channel, which partially closed during the cleanup efforts . The ship channel is a critical commercial waterway that connects oil refineries in the Houston area between the Port of Houston and the Gulf of Mexico.

The tanks at ITC contained components of gasoline and materials used in nail polish remover, glues and paint thinner.

"People living in Deer Park and the other neighboring residential areas near ITC's plant deserve protection too," Harris County District Attorney Kim Ogg said in a statement. "When public health is at risk, it's a public safety concern."

Last month, Texas Attorney General Ken Paxton filed a lawsuit against ITC, saying the state must hold the company "accountable for the damage it has done to our environment."