Producers of potentially toxic substances must notify the EPA before they start making new chemicals or use an existing compound for a significantly new use. 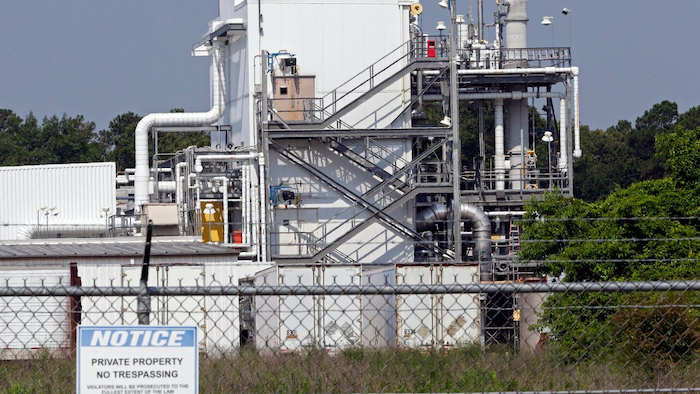 This June 15, 2018, file photo shows the Chemours Company's PPA facility at the Fayetteville Works plant near Fayetteville, N.C. where the chemical known as GenX is produced. The EPA said in a violation notice letter this week that The Chemours Co. also failed to provide information showing when the company learned the chemical GenX contaminated water wells and properties around its factories near Fayetteville and Parkersburg, W. Va.. The agency says the violations found came after inspecting the two plants in 2017.
AP Photo/Gerry Broome, File

The Chemours Co. also failed to provide information showing when the company learned the chemical GenX contaminated water wells and properties around its factories near Fayetteville and Parkersburg, West Virginia, the EPA said in a violation notice letter dated Wednesday.

Federal law requires the producers of potentially toxic substances that "may present an unreasonable risk of injury to health or the environment" to notify the EPA before the companies start making new chemicals or use an existing compound for a significantly new use. That would allow the agency to investigate their effects.

"The review process exists to make sure that new chemicals are safe and that new uses those chemicals are put to are also safe," environmental lawyer Robin Smith said. "It's a basic requirement that's intended to protect health and safety."

Operators of Chemours' Fayetteville plant failed to give those required notices for several chemicals including HFPO, a chemical used to make the compound GenX. GenX has been found in drinking water wells near the plant and also the municipal utility serving the city of Wilmington, about 100 miles (161 kilometers) down the Cape Fear River.

The EPA classifies GenX as an "emerging contaminant" needing research. Animal studies show GenX has the potential to affect the kidneys, blood, immune system, liver and developing fetuses following oral exposure, the EPA said in a draft report released last year. "The data are suggestive of cancer," the report said.

Chemours also failed to contain GenX within its West Virginia plant despite a 2009 agreement with the federal agency that the company would stop 99 percent of the chemical from getting into the water and air.

EPA said it found the violations after inspecting the two plants in 2017. Since then, Chemours has made changes to address some of the issues raised, company spokeswoman Lisa Randall said in an emailed statement. She wouldn't say why Chemours didn't provide EPA with the required notices.

Chemours also should provide within 30 days information EPA previously asked for describing when the Fortune 500 company first learned that GenX had contaminated drinking water wells near the two plants, the agency said.

Its Chemours investigation may find other violations and fines could follow, EPA said.

"It's significant that EPA is now weighing in," said Geoff Gisler, a Southern Environmental Law Center attorney. "EPA ensuring the company is properly documenting and registering the chemicals they're using at the site is an important thing to have happen."