Sections of both the Keystone pipeline and Enbridge Inc.'s Platte pipeline were closed as crews sought to find the source of the leak. 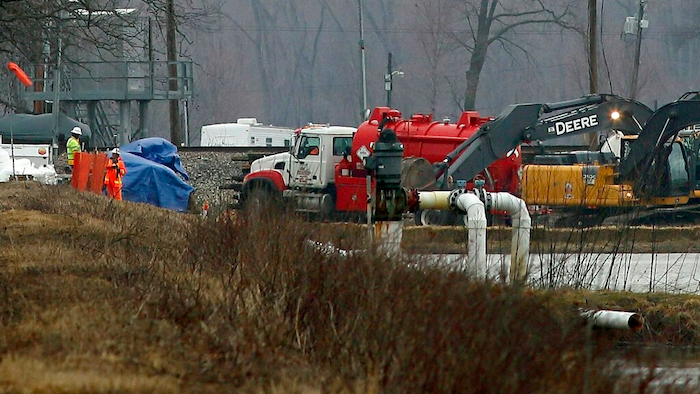 Excavation equipment is used to search for an oil leak close to where the TransCanada Corp's Keystone oil pipeline runs through northern St. Charles County off of Highway C, Thursday, Feb. 7, 2019, near St. Charles, Mo. The source of the oil leak has not yet been identified but the Keystone oil pipeline has been shut and the Missouri Department of Natural Resources official said the the release is stopped.
David Carson/St. Louis Post-Dispatch via AP

JEFFERSON CITY, Mo. (AP) — TransCanada Corp. believes its Keystone pipeline is likely the source of an oil leak near St. Louis that Missouri officials have estimated at 1,800 gallons (6,814 liters), a spokesman for the company said Friday.

Sections of both the Keystone pipeline and Enbridge Inc.'s Platte pipeline were closed as crews sought to find the source of the leak, which was discovered Wednesday in St. Charles County.

"Following overnight activity and excavation, preliminary investigation has led TransCanada to believe that the oil discovered in St. Charles County likely originates from the Keystone Pipeline system and we will continue to conduct our activities accordingly," TransCanada spokesman Terry Cunha said.

Enbridge Inc. spokesman Devin Hotzel said the company is "highly confident" that the Platte pipeline is not the source.

Missouri Department of Natural Resources spokesman Brian Quinn said in an email that if Keystone is confirmed to be the source, "it will remain closed until the cause is determined and necessary repairs or corrections can be made and verified."

Cunha said there's no estimated time for the Keystone pipeline to return to service.

"Onsite crews of approximately 75 people continue to excavate and safely expose the pipeline segment of concern," he said. "These specialists continue to affirm there is no threat to public safety or the environment."

Hotzel said that Enbridge expects its pipeline will be operating normally by Saturday.

Quinn has said the spill was contained to an area of about 4,000 square feet (372 square meters), and did not reach any waterways, including the Mississippi River, which is about 2,000 feet (610 meters) away.

Quinn said the department has met with landowners affected by the spill and "at this time there are no concerns."