Attorneys for the ACLU filed a lawsuit against the Defense, Homeland Security, Interior and Justice departments. 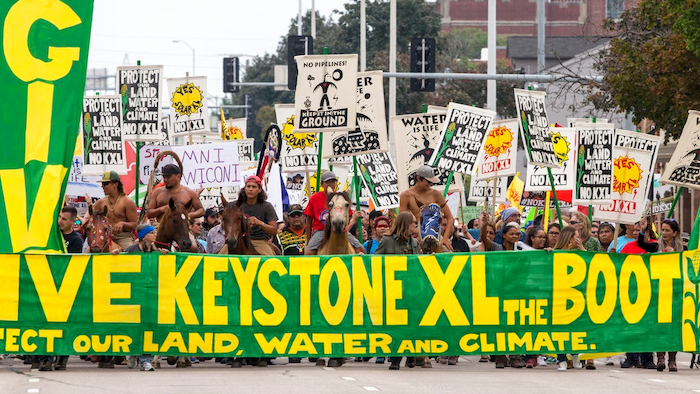 In this Aug. 6, 2017, file photo, demonstrators against the Keystone XL pipeline march in Lincoln, Neb. Civil liberties advocates have sued the U.S government alleging law enforcement agencies are maneuvering to crack down on anticipated protests over the Keystone XL oil pipeline. Attorneys for the American Civil Liberties Union want the court to order the release of all records pertaining to cooperation between federal, state and local law enforcement and private security companies. The suit cites prior efforts to disband protesters opposed to a separate project, the Dakota Access Pipeline.
AP Photo/Nati Harnik, file

Attorneys for the American Civil Liberties Union and its Montana affiliate filed the lawsuit in U.S. District Court in Missoula against the Defense, Homeland Security, Interior and Justice departments.

They asked the court to order the release of all documents about cooperation over the pipeline between federal, state and local law enforcement and private security companies.

The groups cited confrontations between law enforcement and protesters, including many Native Americans, which turned violent during construction of the Dakota Access Pipeline through South Dakota.

"The big question is what level of attention the (federal) government is paying to the issue," Rate said. "If you're an indigenous person in Montana planning to protest peacefully against the construction of the pipeline, you have to be nervous about how the government is going to react."

The pipeline would transport up to 830,000 barrels of crude oil daily from Canada through Montana and South Dakota to Nebraska. It was approved by President Donald Trump in March 2017, a decision that's been challenged in court.

A judge in that case last month ordered federal officials to conduct a more thorough review of the project after the Nebraska Public Service Commission approved an alternative route for the line through Nebraska.

Homeland Security spokeswoman Katie Waldman said the agency does not comment on litigation.

The Interior Department referred questions to the Justice Department, which did not immediately respond to a request for comment.

The lawsuit included emails in which federal officials discussed the establishment of an "interagency team" to coordinate security of Keystone XL construction.

Also included was a Homeland Security analysis from last year on attacks on pipelines by "environmental rights extremists." The document focused in part on activists who sought to shut down five pipelines along the U.S.-Canada border by illegally closing valves on the lines.

The material was obtained by the ACLU under public records requests submitted to state and local agencies, Rate said.