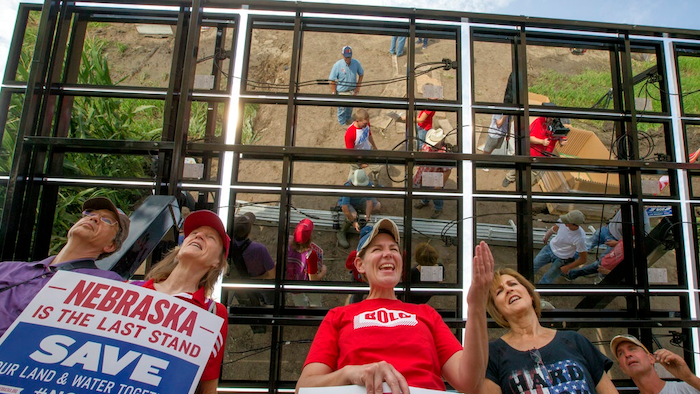 In this July 29, 2017 photo, Jane Kleeb, president of Bold Alliance, center, landowner Chris Carlson, second right and volunteers, pose for a photo under an array of solar panels they built in a corn field belonging to the Carlsons of Silver Creek, Ne., in the proposed path of the Keystone XL pipeline. Despite new uncertainty over whether TransCanada, the builder of the Keystone XL pipeline will continue the project, longtime opponents in Nebraska aren't letting their guard down and neither are law enforcement officials who may have to react to protests if it wins approval.
AP Photo/Nati Harnik

LINCOLN, Neb. (AP) — The proposed Keystone XL pipeline survived nine years of protests, lawsuits and political wrangling that saw the Obama administration reject it and President Donald Trump revive it, but now the project faces the possibility of death by economics.

Low oil prices and the high cost of extracting Canadian crude from oil sands are casting new doubts on Keystone XL as executives with the Canadian company that wants to build it face the final regulatory hurdle next week in Nebraska.

The pipeline proposed in 2008 has faced dozens of state and federal delays, many of them prompted by environmental groups who ultimately persuaded President Barack Obama to deny federal approval in November 2015. President Donald Trump resuscitated the project in March, declaring that Calgary-based TransCanada would create "an incredible pipeline."

After all that, a TransCanada executive raised eyebrows in the energy industry last week when he suggested that the pipeline developer doesn't know whether it will move forward with the project. Paul Miller, an executive vice president who is overseeing the project, told an investor call that company officials won't decide until late November or early December whether to start construction.

"We'll make an assessment of the commercial support and the regulatory approvals at that time," Miller said in the conference call Friday with investors.

The company has invited customers to bid for long-term contracts to ship oil on the pipeline. The bidding will run through September.

An energy expert said the project has been delayed so long it may no longer make economic sense.

"Frankly, in the current price climate, it's probably not going to be a going venture unless there's a massive improvement in technology" for processing Canadian crude, said Charles Mason, a University of Wyoming professor of petroleum and gas economics. Crude oil was trading at around $49.50 a barrel on Wednesday, down from highs of more than $100 in 2014.

The 1,179-mile pipeline would transport oil from tar sands deposits in Alberta, Canada, across Montana and South Dakota to Nebraska, where it would connect with existing pipelines that feed Texas Gulf Coast refineries.

South Dakota and Montana regulators have approved the project, although there are legal challenges pending in both states. Only Nebraska has yet to give regulatory approval. The rest of the route for the oil to the Gulf would travel an existing pipeline in the network.

Mason said the biggest economic problem is that synthetic crude from the Canadian deposits is considered a lower-value product because it tends to be heavier, and thus more expensive to refine into gasoline and jet fuel. It's also more expensive to extract than other oils.

Producers have also found other ways to ship oil, primarily by train, and many are reluctant to sign long-term contracts with a pipeline that wouldn't go into operation for several more years, said Jeff Share, editor of the Houston-based Pipeline & Gas Journal, a leading industry publication. Given the difficulties, Share said TransCanada has probably a "50-50" chance of completing the project.

The five-member Nebraska Public Service Commission is supposed to decide by Nov. 23 whether the project serves the public's interests, based on evidence presented by attorneys in a formal legal proceeding beginning Monday and a series of public hearings held over the last few months. The elected commission is comprised of four Republicans and one Democrat.

Environmental opposition to the project has persisted in Nebraska, where opponents say the pipeline would pass through the Sandhills, an ecologically fragile region of grass-covered sand dunes, and would cross the land of farmers and ranchers who don't want it.

Nebraska law enforcement authorities already have had discussions with their counterparts in North Dakota about how that state handled widespread protests during construction of the Dakota Access Pipeline near the Standing Rock Indiana Reservation, said Cody Thomas, a Nebraska State Patrol spokesman.

Protesters led by Native American tribes and environmental groups flocked to North Dakota last summer to rally against the Dakota Access Pipeline, and some camped out in bitter cold through early this year, prompting the state to send a large law enforcement contingent that sometimes skirmished with protesters. The pipeline was ultimately completed but legal challenges remain.

Pipeline opponents in Nebraska said they are wary of TransCanada's recent statements and don't believe the company will surrender without a fight.

"We can't let our guard down," said Jim Carlson, a farmer near Silver Creek, Nebraska, who grows corn on the pipeline's proposed route. "We've got to continue to be vigilant and proactive. TransCanada could be doing things just to throw us off."

Carlson said TransCanada has offered him $307,000 since the company first contacted him in 2013, but he refuses to sign an easement agreement to grant access to his land. To highlight his opposition, Carlson is installing solar panels on his land directly in the path of the proposed pipeline.

If the Nebraska commission approves the route, TransCanada can initiate legal proceedings under eminent domain to gain access to the land of holdout property owners. TransCanada has secured agreement with roughly 90 percent of Nebraska landowners along the route.

The company said that if it decides to go ahead with the project, it would need six to nine months to start doing some of the staging of the construction crews followed by two years of construction.