The order was issued because the trade bureau requires special approval for non-standard beer ingredients. 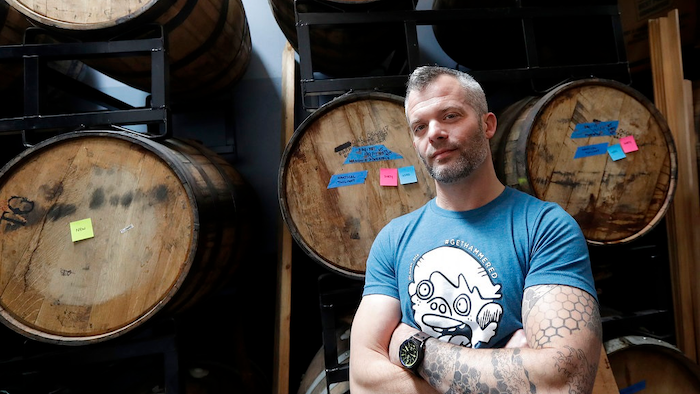 Jim Furman, CEO of Black Hammer Brewing, poses for photos in front of barrels in San Francisco, Thursday, May 24, 2018. U.S. officials have ordered the San Francisco brewery to stop producing beer containing cannabidiol, the hemp-derived extract known as CBD. The U.S. Alcohol and Tobacco Tax and Trade Bureau is allowing Black Hammer Brewing to sell the rest of the CBD beer it already brewed, including one called Toke Back Mountain.
AP Photo/Jeff Chiu

The U.S. Alcohol and Tobacco Tax and Trade Bureau is allowing Black Hammer Brewing to sell the rest of the CBD beer it has already brewed, including an IPA called Toke Back Mountain that was introduced in 2017 in honor of the 4/20 marijuana holiday.

Like marijuana, hemp is a cannabis plant. But it contains very little THC, the compound that gives pot its high. CBD is seen by many as a health aid, though scientific proof is lacking.

The brewery plans to apply for the approval.

It's surprising what is considered standard and nonstandard in the American beer industry. Rose hips are standard but rosewater is not. Guava is standard, but not passion fruit.

Hemp is not on the standard list and neither are terpenes, the compounds that Black Hammer uses to give the beers its dank cannabis flavor.

"Our guests love the CBD beers, and we're pretty sad that we have to stop producing them," said owner Jim Furman.

Furman said he considers Hippie Hill, an imperial IPA, to be his greatest success of the eight CBD beers he has created.

"It's got the most dialed-in cannabis flavor profile," he said.