He helped promote a $208 million incentive package as a good deal for taxpayers. 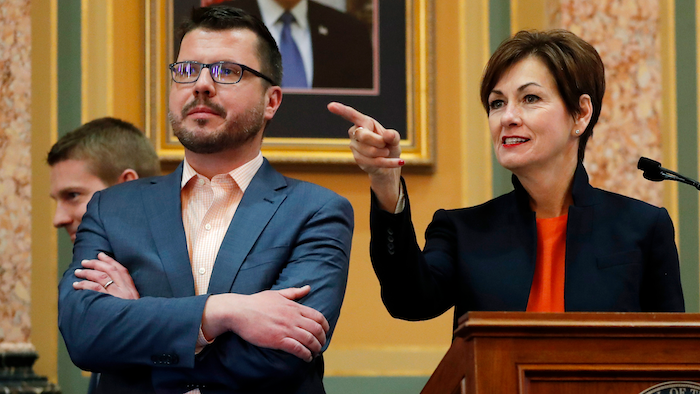 In this Jan. 8, 2018, photo Iowa Gov. Kim Reynolds does a walk through in the Iowa House chambers with deputy chief of staff Tim Albrecht, left, at the Statehouse in Des Moines, Iowa, before her Condition of the State address the next day. Albrecht has been hired by Apple months after helping promote a $208 million incentive package for the company's planned Iowa data center as a good deal for taxpayers. Albrecht departed as Reynolds' deputy chief staff, then began as manager of strategic initiatives for Apple in March.
AP Photo/Charlie Neibergall

Tim Albrecht left as Reynolds' deputy chief of staff to begin work at Apple in March as a regional manager of strategic initiatives. Albrecht's position is "unrelated" to the $1.3 billion complex the company is building outside Des Moines, a deal the administration negotiated, announced and defended when Albrecht was Reynolds' senior adviser, according to the governor's office.

Supporters of the Apple project have argued that it's a landmark development for the fast-growing city of Waukee that will strengthen the state's tech industry. Critics, including some economists and Democrats running for governor, have blasted the $208 million in tax breaks pledged by the city and state, saying they're far too generous for a project that will only create 50 full-time jobs once construction is complete.

Albrecht, a longtime GOP public relations professional, was involved in planning and reviewing information for an Aug. 24 press conference in which Reynolds and Apple CEO Tim Cook announced the project to applause outside the Capitol, the governor's office confirmed.

"Welcome to Iowa, Apple!" Albrecht tweeted along with a photo from that event, among more than two dozen tweets he sent from his personal account over a one-month period promoting the deal.

Many of those were retweets of news articles and state officials characterizing the deal as a "win-win for Iowa" and great investment.

"Tim is one of the most respected communicators in Iowa, and the governor is grateful for his many years of service to the state," Smith said.

Albrecht, who made $121,000 annually in his state job, referred questions to Apple representatives, who declined to comment on Albrecht's hiring, job duties and salary.

Megan Tooker, director of the Iowa Ethics and Campaign Disclosure Board, said Albrecht is not barred from working for Apple but must comply with laws designed to prevent ex-state officials from cashing in on their influence. For instance, for two years after leaving state employment, officials cannot lobby their former agencies or be paid by companies "in relation to any case, proceeding or application" with which they were involved in government.

Albrecht, 40, spoke by phone with Tooker on Feb. 20 about his prospective employment, according to an email exchange obtained under the open records law. Tooker sent him links to applicable laws and the board's key prior opinion on the matter. She said she hasn't heard from him since and that he didn't request a formal opinion for his situation.

The prior opinion she sent him addressed the employment of Jeff Boeyink, who resigned as chief of staff to Gov. Terry Branstad in 2013 and became one of Iowa's most powerful lobbyists. Boeyink, who worked with Albrecht in Branstad's office, was paid by Apple to lobby on its behalf during the legislative session that concluded Saturday, records show .

Albrecht's position at Apple might be legal but will look problematic to the public, said attorney Gary Dickey, former general counsel to Democratic Gov. Tom Vilsack.

"A person who uses his state employment to financially enrich a company — and then goes to work for that company — certainly violates the spirit of the rule," he said.

Apple chose Iowa to build two data centers on 2,000 acres of land that will serve users of Siri, iMessage and other products. Iowa was attractive because of its wind energy production and location typically free from earthquakes and blackouts. Waukee agreed to cut Apple's property taxes by 71 percent over 20 years — a break worth $188 million. A state board approved $19.6 million in tax credits through its High Quality Jobs program. Apple has pledged to fund millions in public improvements in Waukee in coming decades, beginning with a youth sports complex.

The incentives have been criticized for months by some members of both parties as overly generous, including a former Republican primary opponent of Reynolds. Democratic candidate for governor Fred Hubbell has run television ads that display the words, "Apple played Iowa for suckers." A tax bill approved Saturday by the Republican-controlled Legislature requires the state to review all tax credit programs related to economic development.

Iowa State University economist Dave Swenson said the Apple deal comes at the expense of all other taxpayers. "As to Albrecht's good fortune, why am I not surprised?" he said.